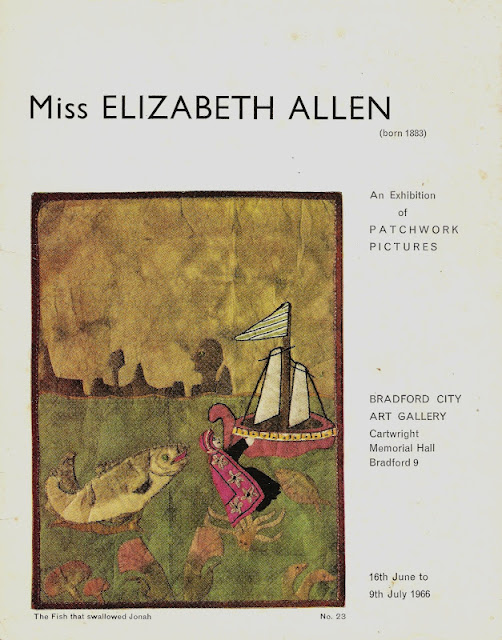 Way back when I was a Young Mother my Aunt-in-Law gave me a catalogue from an exhibition she'd seen in the 1960s. It greatly interested me, partly because I enjoyed working with fabrics and thread myself, and partly because  the background to the exhibition involved artists I had met as a student and their discovery, unknown to me at the time, of our own English Grandma Moses, a naive or outsider artist working in the wilds of Kent. It inspired me to make my own textile pictures. 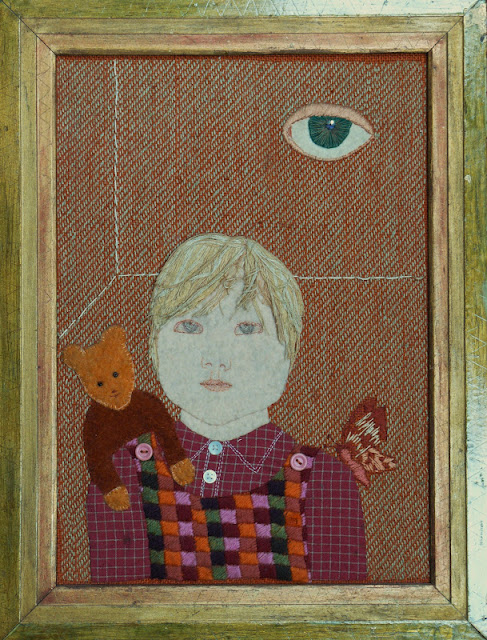 Here is M with his favourite Teddy perched on one shoulder. On the other I have embroidered a butterfly to symbolise the fragility and beauty of youth. The watchful eye was mine of course - ha ha!
The artists who had found this elderly lady, Elizabeth Allen or "Queen" as she preferred to be called, living in an isolated, primitive hut in a wood near Biggin Hill, included Trevor Bell, an abstract artist associated with the St. Ives group, and Michael Kidner, a pioneering op artist.
Here is one of her pictures... 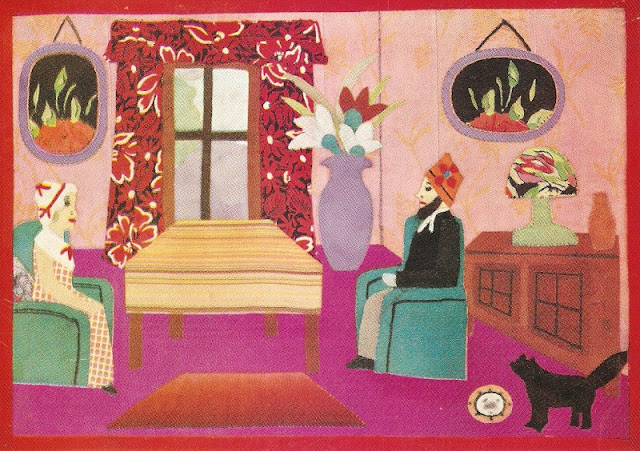 ...and another one of mine. 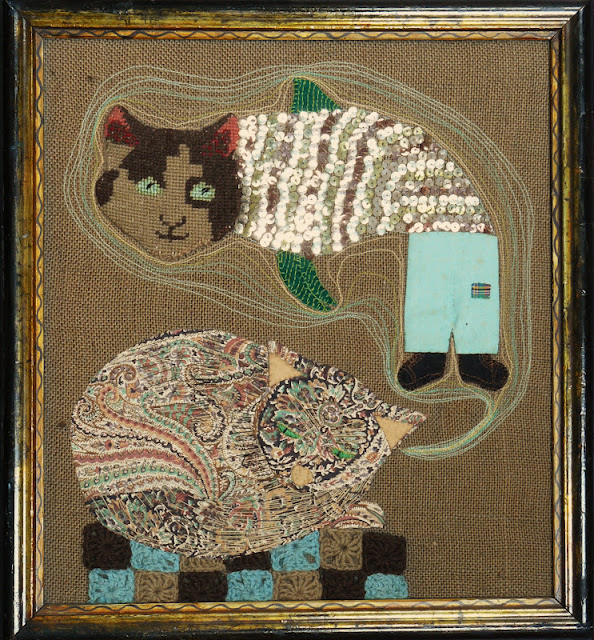 Norbert Lynton, then Professor of the History of Art at Sussex University, reviewed the exhibition for the Guardian newspaper in an enthusiastic though slightly patronising tone which, perhaps, showed his ignorance of the use of needlecraft as a form of expression dating back thousands of years, so unused was he to regarding mere sewing as Art.
Queen's embroideries were described as rag mosaics which brings to my mind the inlaid patchworks of the 19th century and earlier, large and highly detailed coverlets, often made by tailors who supplemented their incomes by charging the public to view their wonderful creations. 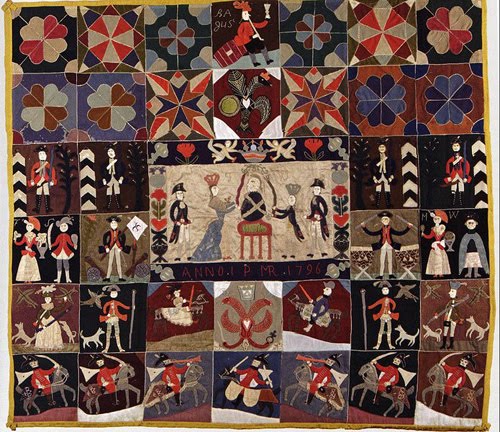 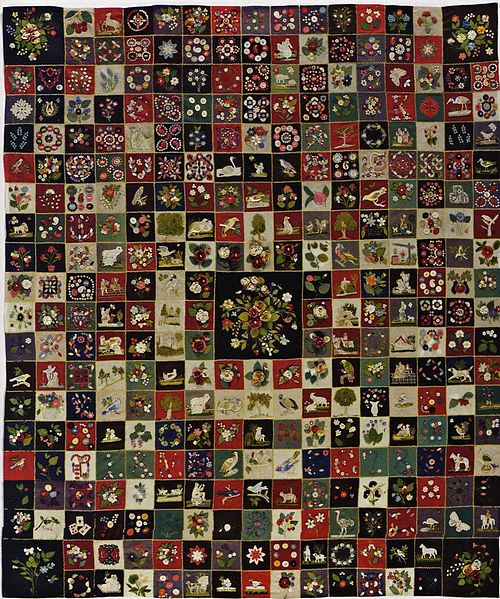 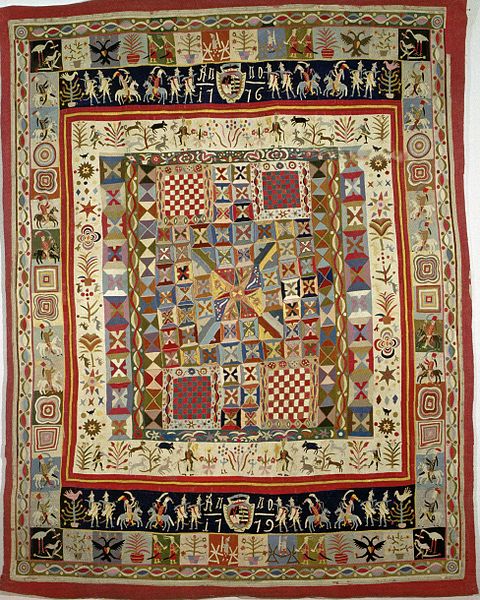 But perhaps Queen's appliques, and mine too, are more closely related to the primitive textile pictures made by George Smart, a Kentish tailor, in the 1830s. 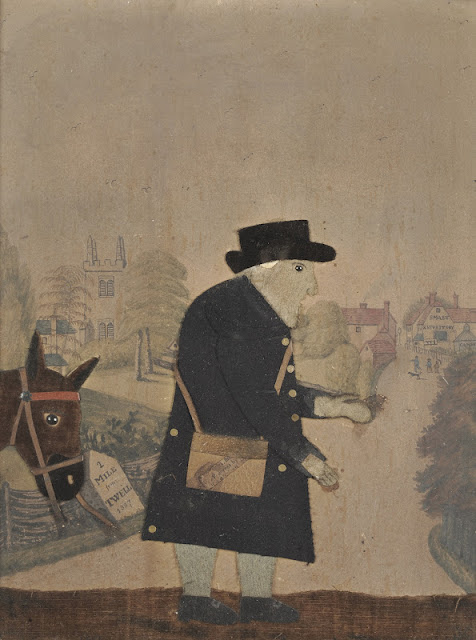 Now, of course, everybody's at it, though I do hear tell that a certain famous Maid of Kent employed a team of six stitchers to create her colourful quilts. 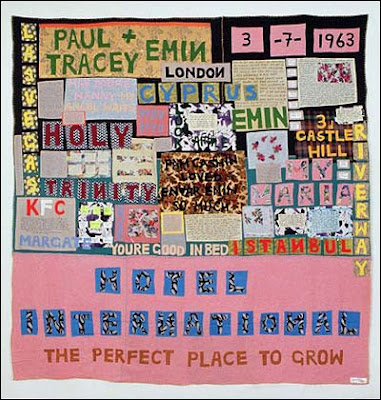