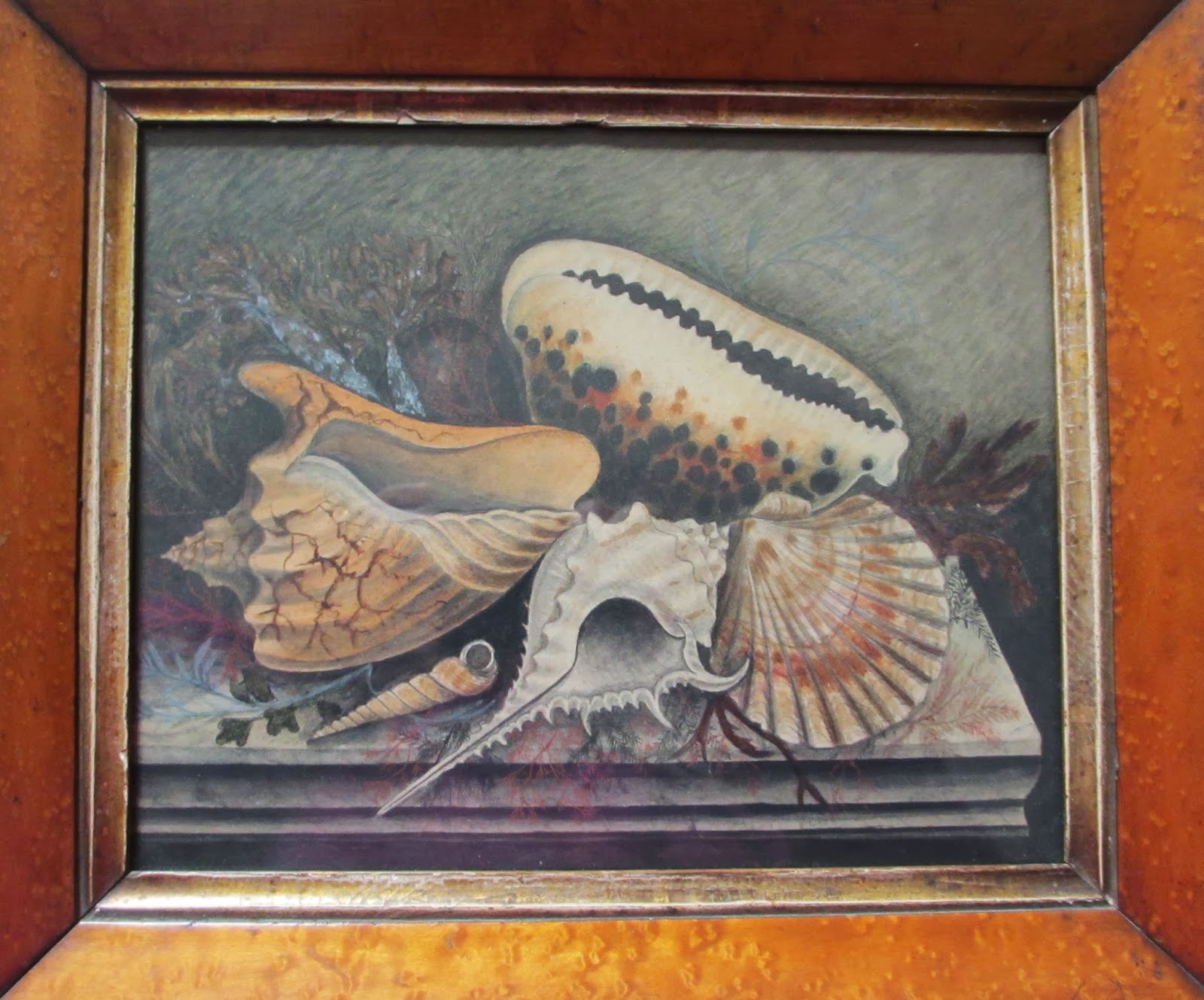 Like these Victorian glass sand bells, paperweights filled with coloured sands from Alum Bay on the Isle of Wight. 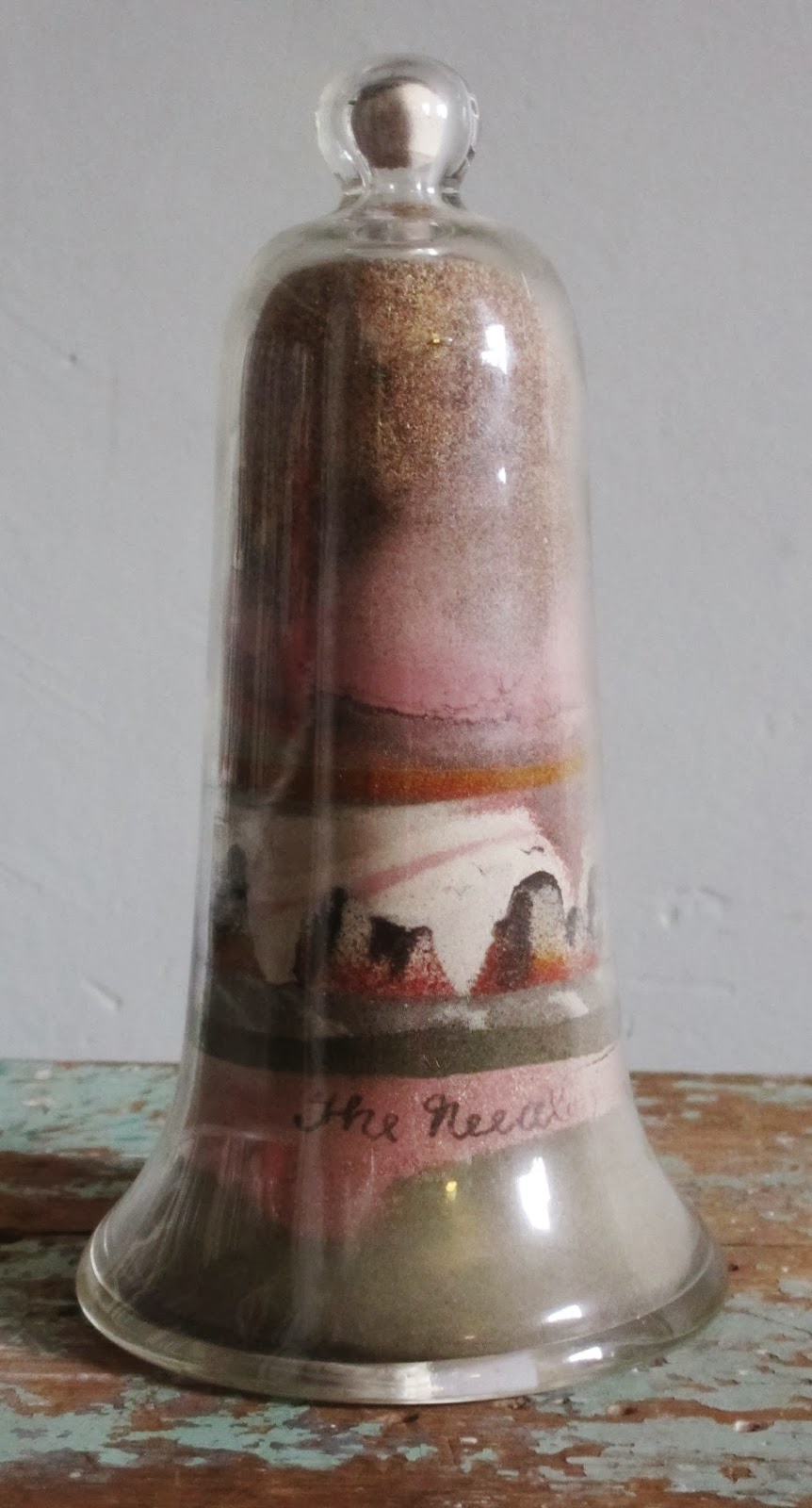 This one is eight inches tall, and heavy enough to be a door stop. 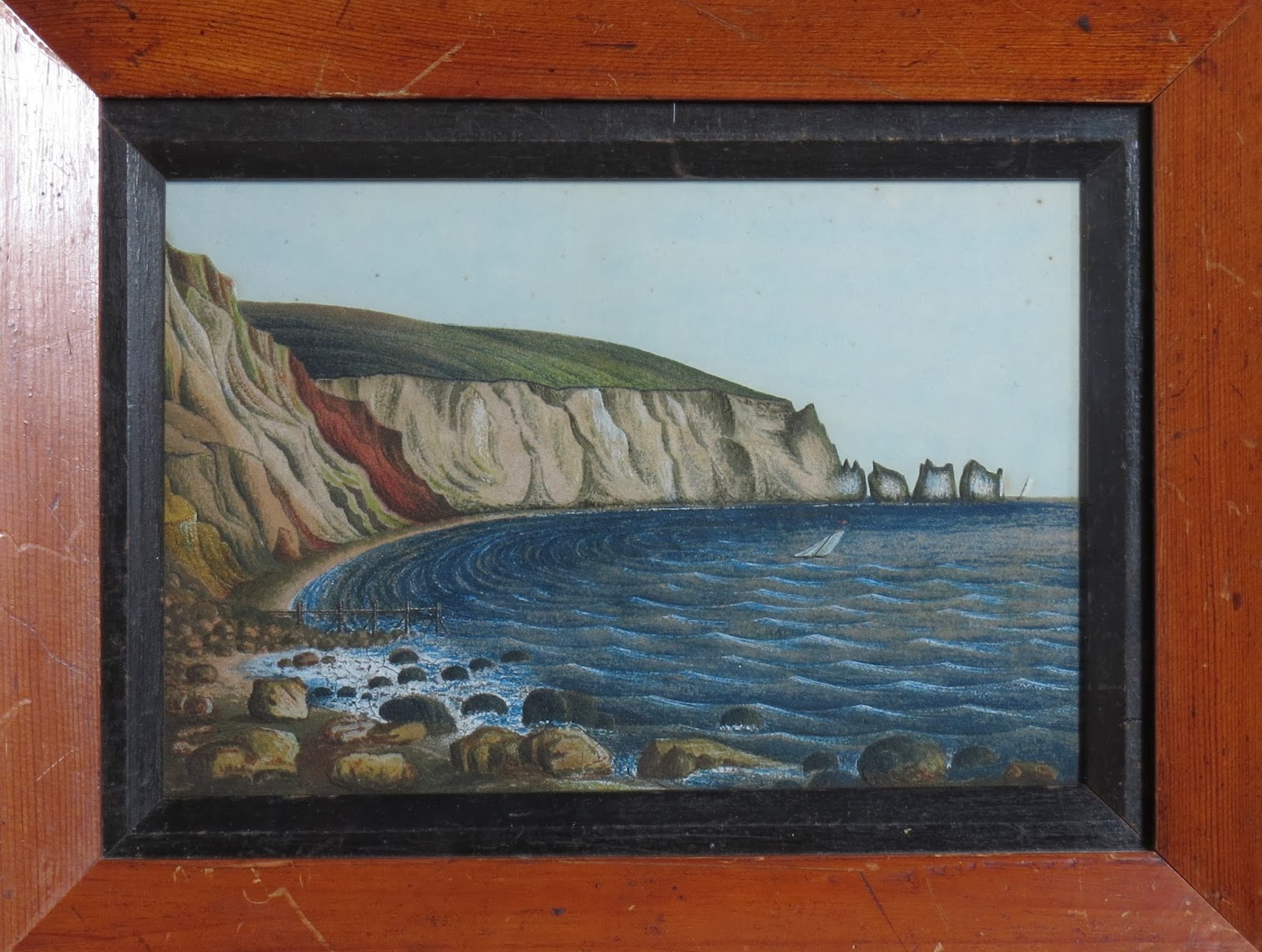 I love this primitive sand painting of The Needles, created by master mariner William Carpenter, again from local coloured sands, in about 1850. 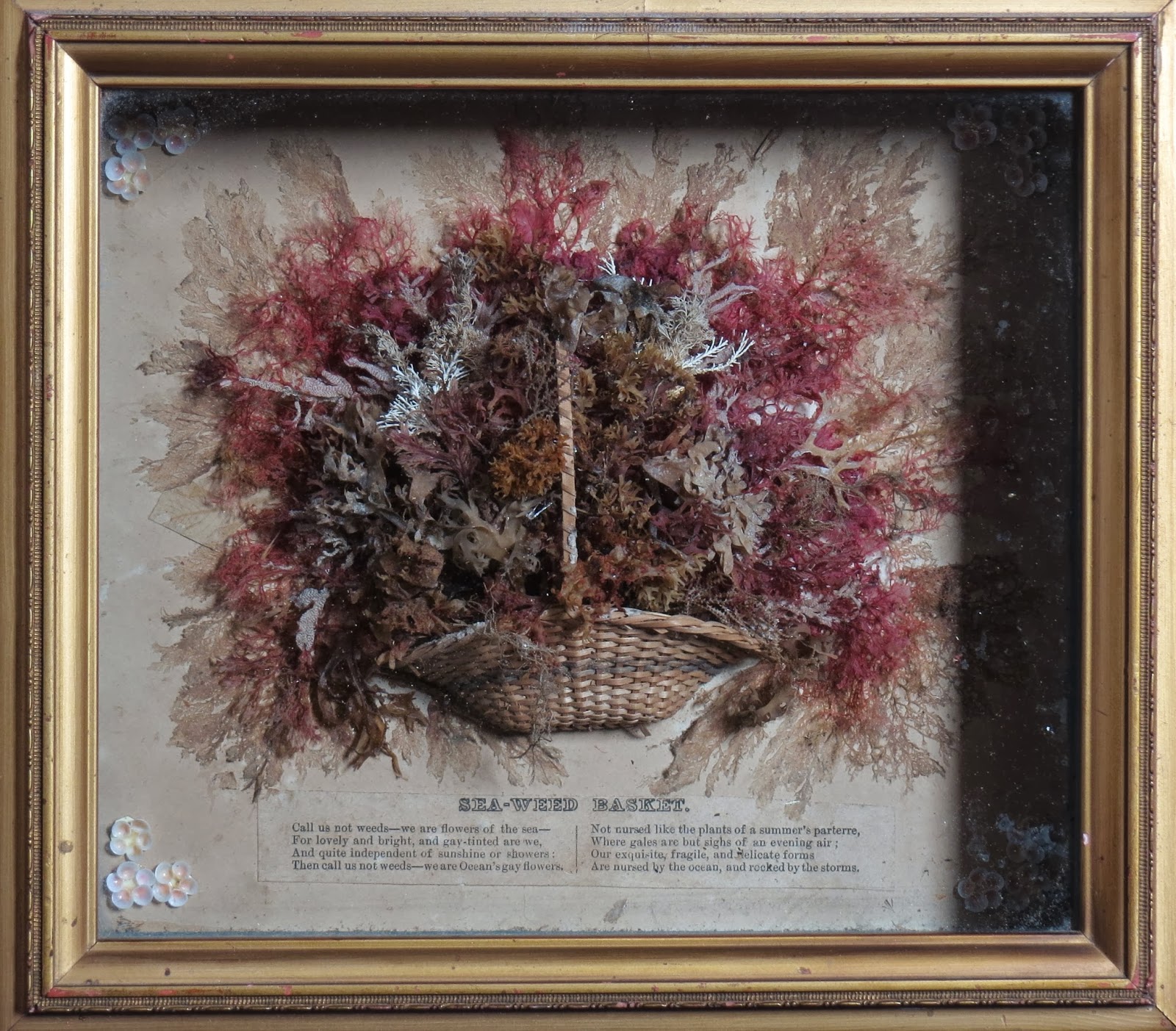 An antique Sea-Weed Basket, with a poem.
Call us not weeds - we are flowers of the sea -
For lovely and bright and gay-tinted are we,
And quite independent of sunshine or showers;
Then call us not weeds - we are Ocean's gay flowers.
Not nursed like the plants of a summer's parterre,
Where gales are but sighs of an evening air;
Our exquisite, fragile and delicate forms
Are nursed by the oceans and rocked by the storms. 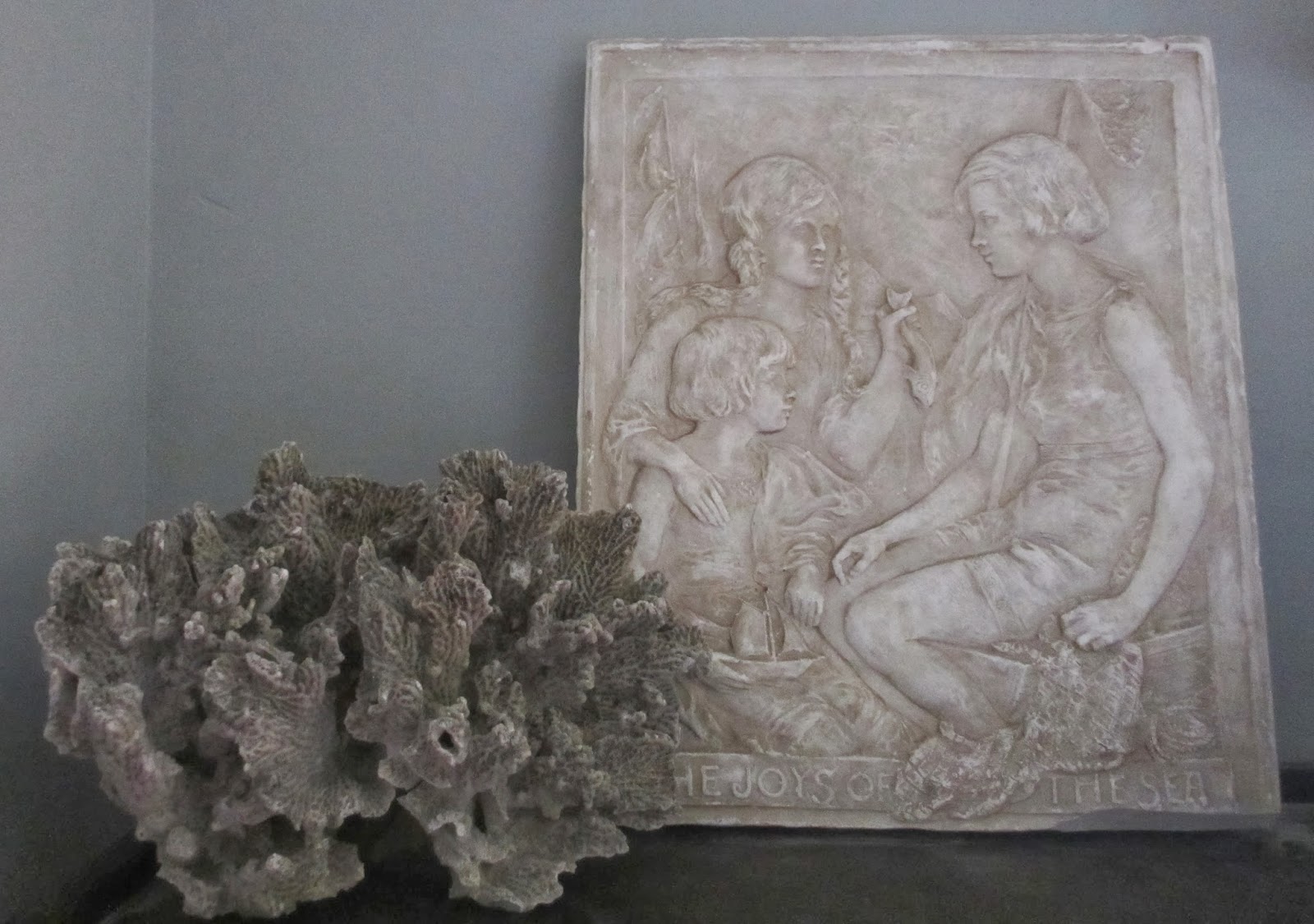 The Joys of the Sea. 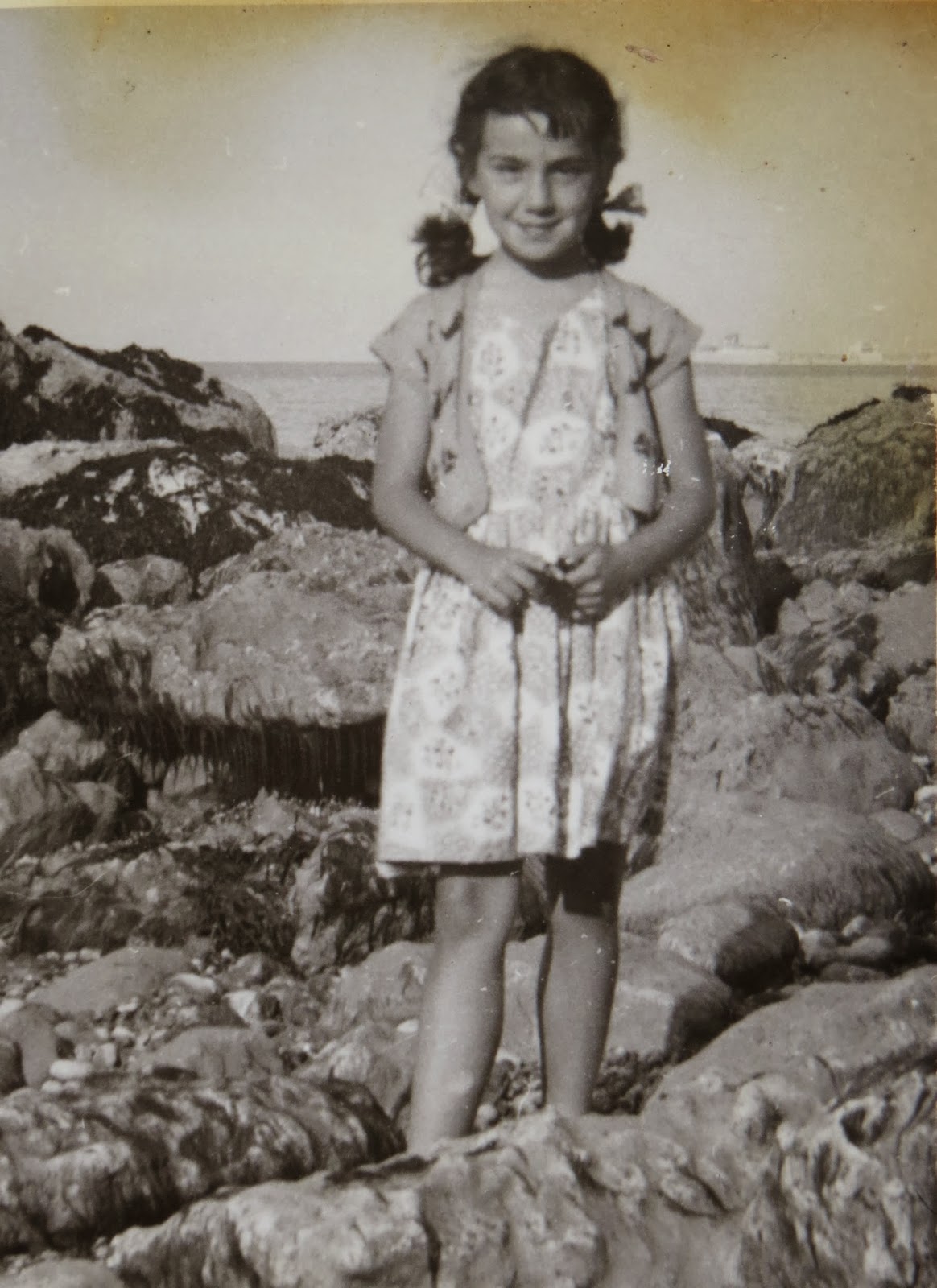 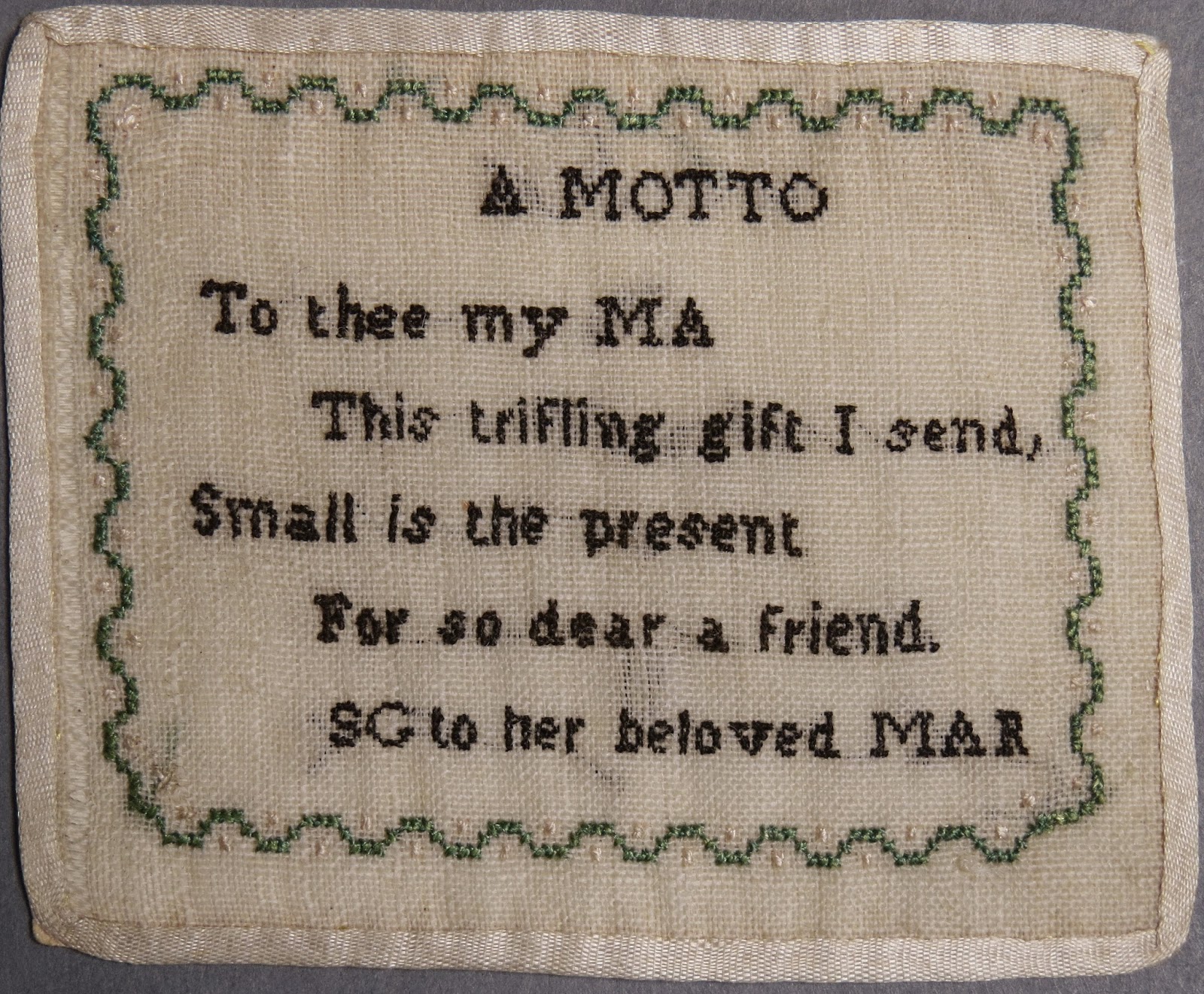 A tiny needlework sampler, perhaps for use as a bookmark, circa 1830
I found this little sampler the other day, made as a gift for a dear friend, and I was reminded of that very 19th century relationship, the Romantic or Passionate Friendship.
When he was in his teens young Master F signed off texts and phone calls to his mates with, "Love you!" and "Love you too!", but I suspect this was an ironic posture rather than an expression of sincere feelings towards those other young scamps.
If I were to send overly affectionate emails and letters to my good friends I think they might be a little alarmed, but in the nineteenth century effusive declarations were commonplace. Here's Emily Dickinson ... 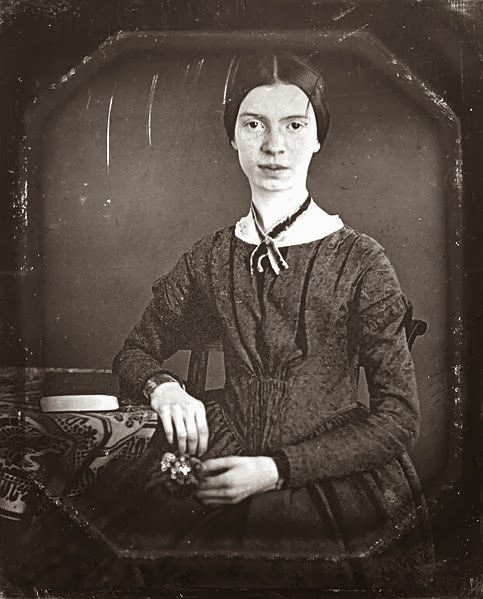 ...writing to her friend and, later, sister-in-law, Susan Gilbert:
*
"If you were here - and Oh that you were, my Susie, we need not talk at all, our eyes would whisper for us, and your hand fast in mine, we would not ask for language..."
* 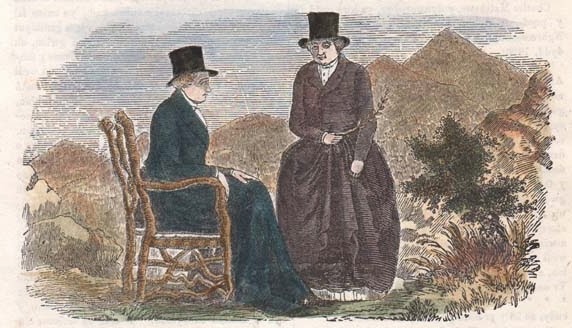 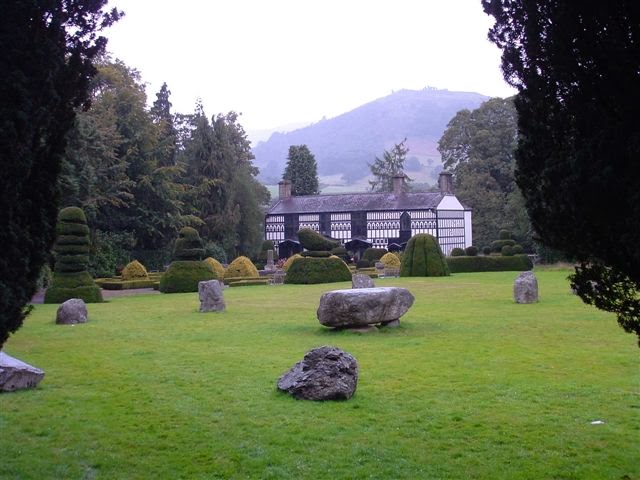 Plas Newydd, their happy home.
*
In 1817, Eleanor wrote to her friend, Mrs Montagu:
"I kept my bed all day with one of my dreadful headaches. My Sara, my tender sweet love lay beside me supporting my head till one o'clock... 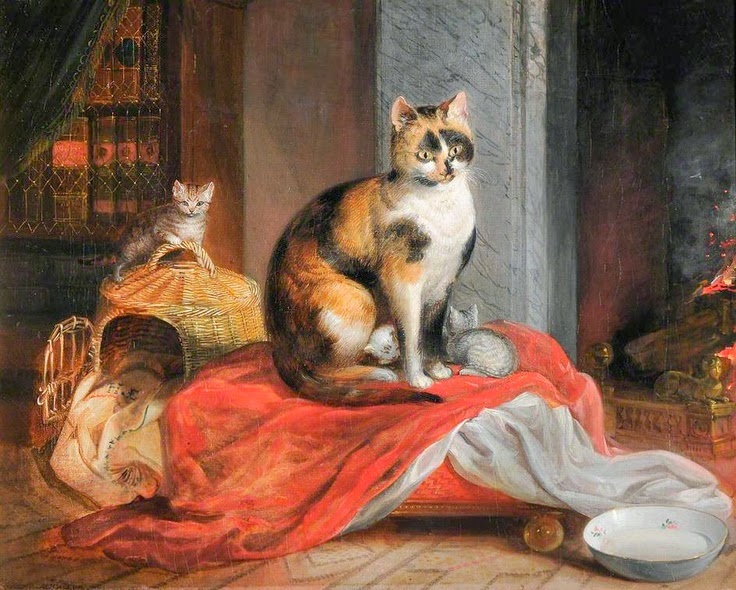 Even their cats were loved up - this painting is still at Plas Newydd.
*
"...Mrs Tatters (our cat) uneasy that we did not come downstairs at the usual hour, scratched at our door for admittance, came on the bed to me and lay there till ten o'clock at night purring all the time. A day of tenderness and sensibility."
*
Louisa May Alcott wrote;
"Perfectly respectable Victorian women wrote to each other in terms such as these: "I hope for you so much, and feel so eager for you...that the expectation once more to see your face again, makes me feel hot and feverish." They recorded the "furnace blast" of their "passionate attachments" to each other. They carved their initials into trees, set flowers in front of one another's portraits, danced together, kissed, held hands, and endured intense jealousies over rivals or small slights." 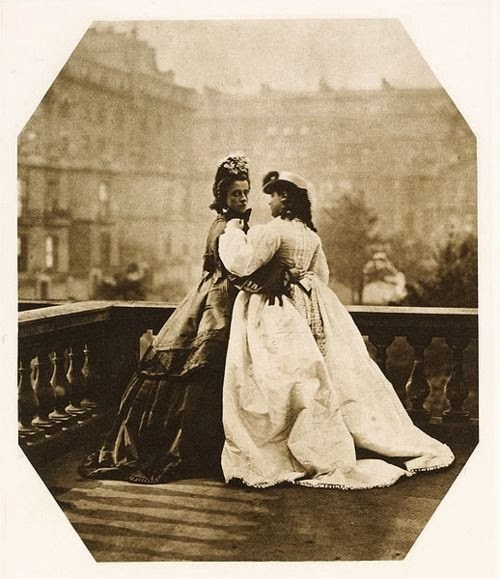 However, I cannot imagine that my lowly Victorian ancestors had time or energy to spend on indulging such wild fancies. I did... 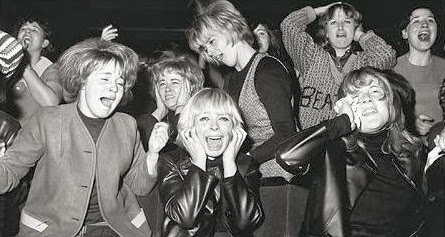 THE PAST IS ANOTHER COUNTRY... 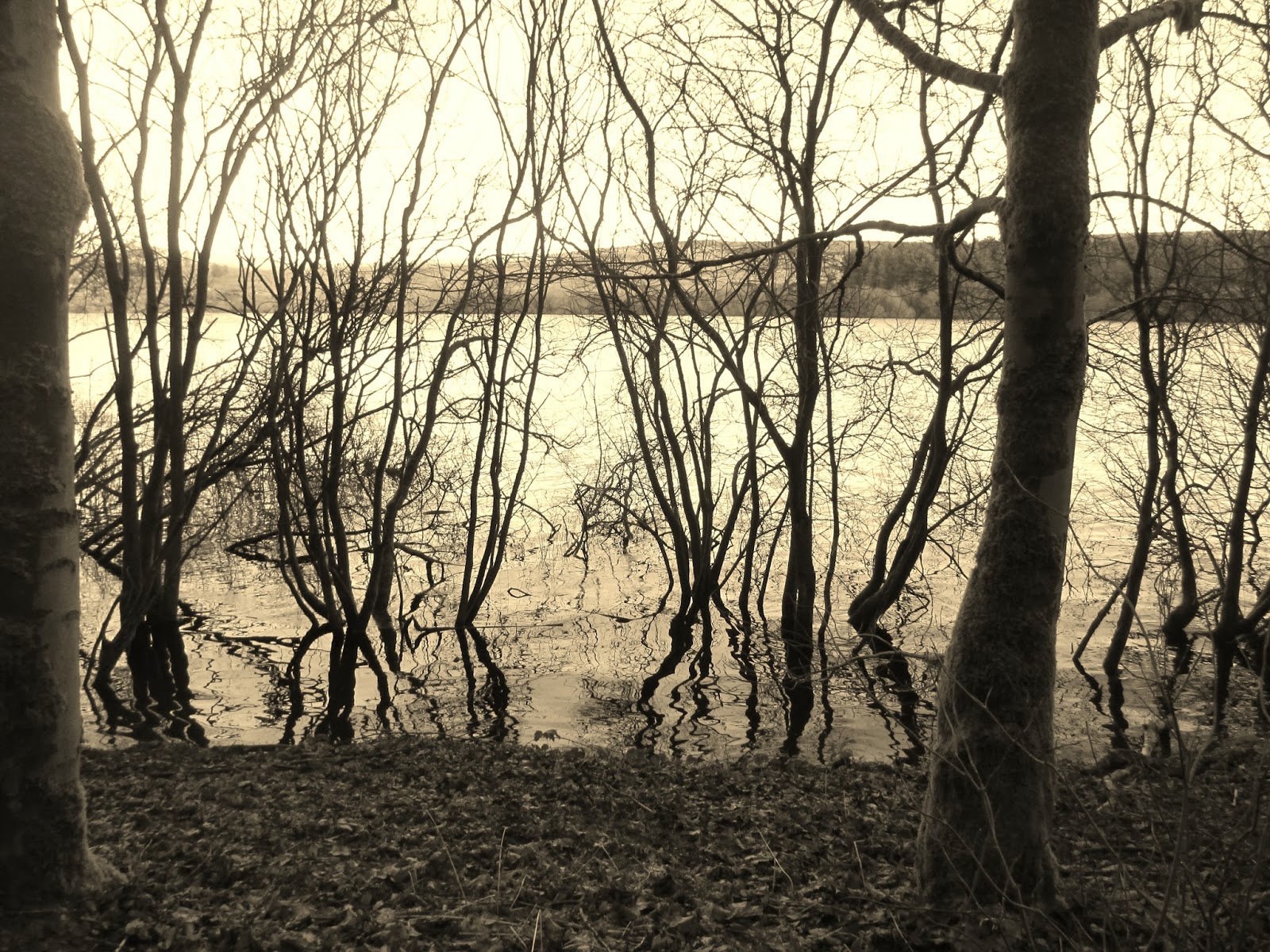 The first words of L.P. Hartley's novel "The Go-Between" fit very well with my feelings about our trip down memory lane yesterday - words I was reminded of when we arrived home and put our feet up. We turned the TV on and were treated to the wonderful film version of this novel starring Julie Christie and Alan Bates. 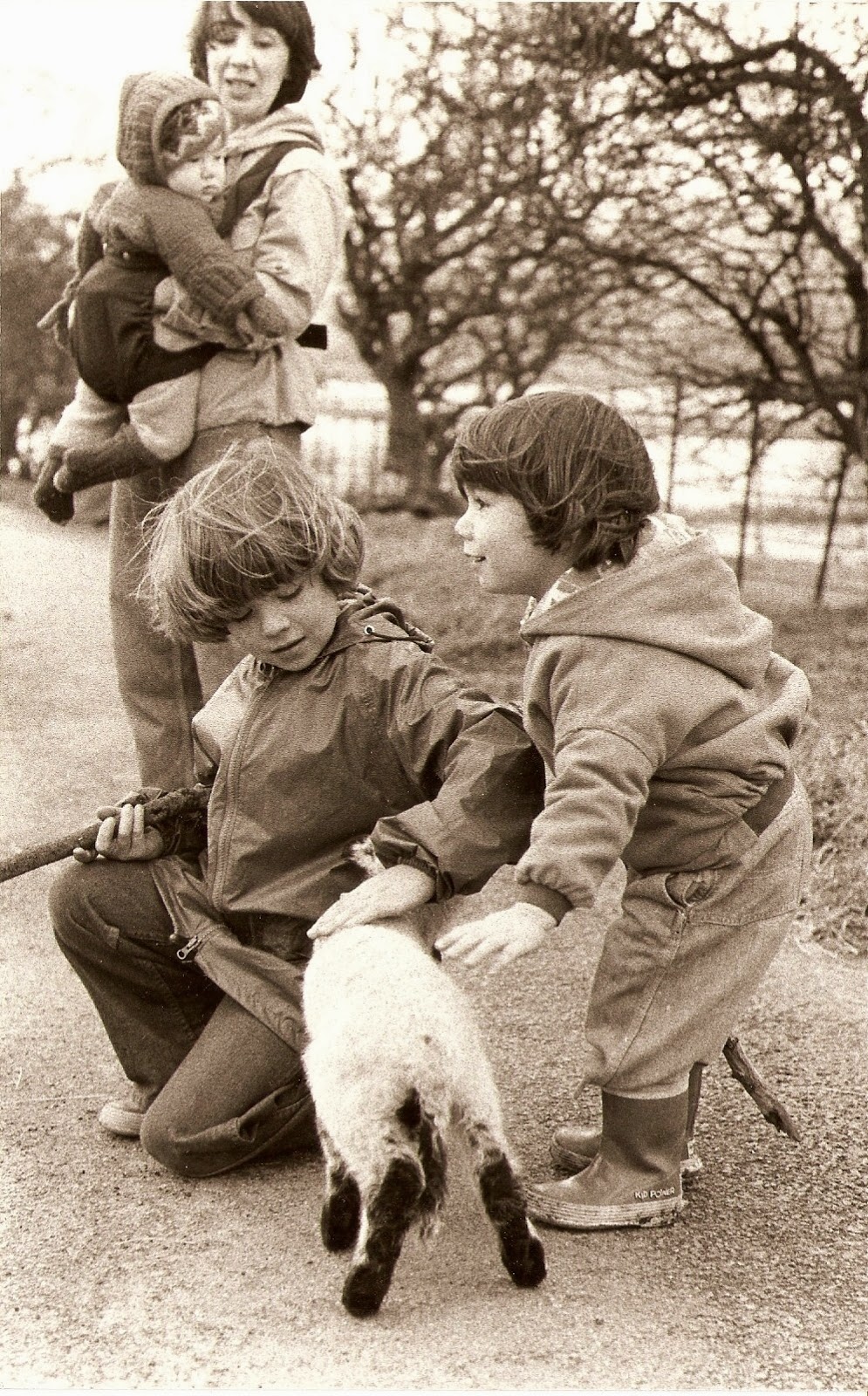 In days long past, when my oldest three were small boys, we often spent Sundays exploring the spectacular landscape around the reservoirs near Harrogate. Swinsty, Timble, Grimwith, Gouthwaite, Scar House, Thruscross  couldn't be anywhere but Yorkshire, could they?
Once upon a time, in another life, I even thought of living up there amongst the moors and man-made lakes. The local water authority, pre-privatisation, was selling off derelict farmhouses in the late 1970s and we saw many as we explored.

This pretty ruin inspired me to make a little patchwork picture (editing out a derelict barn or two)... 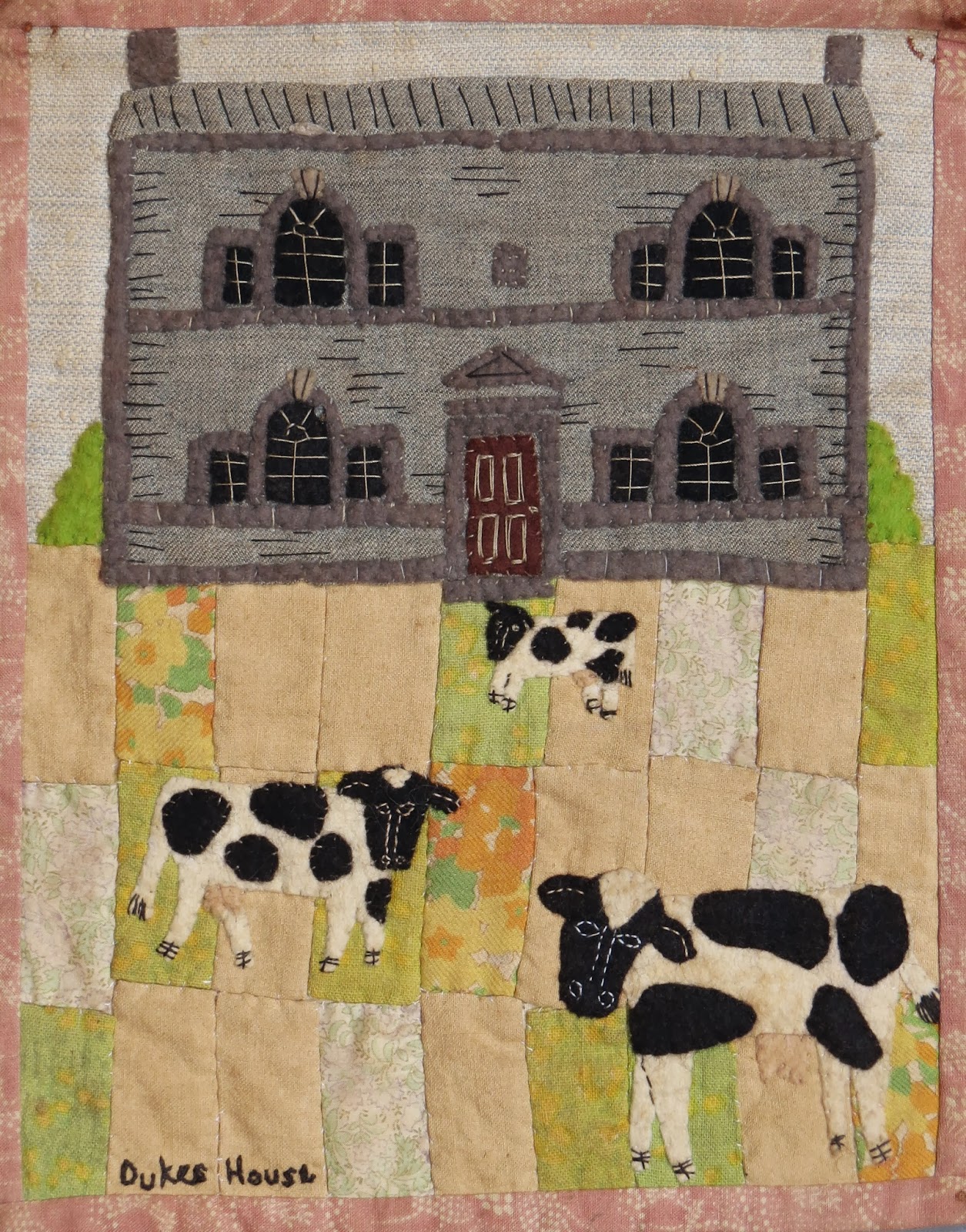 ... but ownership of the real thing was to remain an unfulfilled dream.
Yesterday we went looking for the real Duke's House. It's not part of Mr N's history so locating it after all this time was up to me, as Google had never heard of the place. I remembered it being located near the reservoir, which was created in 1966 by flooding the village of West End. 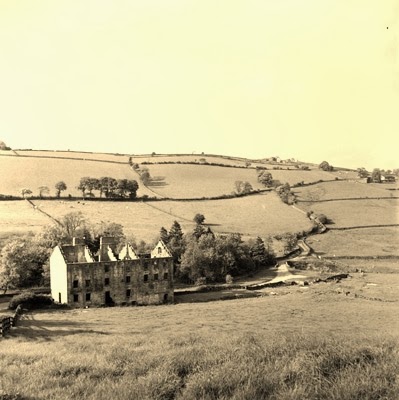 
I consulted maps, but could see no mention of Duke's House although there was a "Duke's Hill" near Thruscross. I knew the house was very near there so, full of confidence, I led the way. 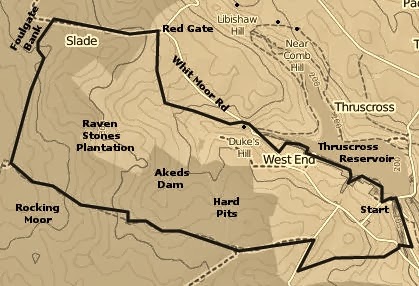 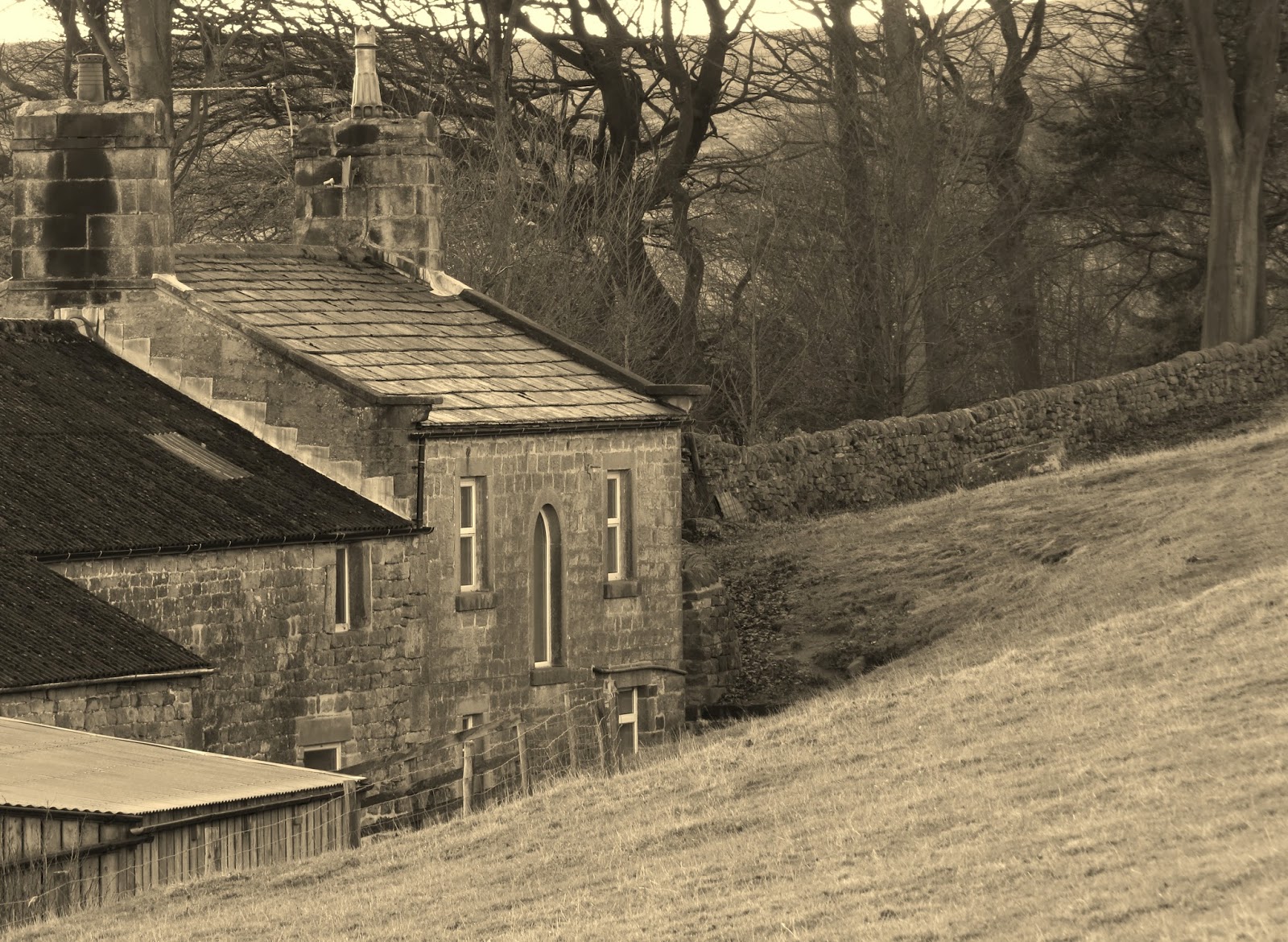 Could this be it? Up on Duke's Hill but somehow it didn't look right. In the end we gave up, though the walk around the reservoir was well worth the effort. At home (after watching the film) I looked on the internet again and found the elusive house, now re-christened Duke's Hill Cottage - across the road and up a track from where we'd searched. 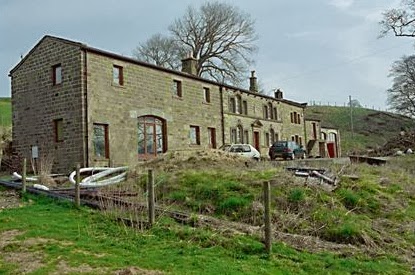 Here it is - the pretty little farmhouse, now dominated by a huge barn conversion, is just recognisable with its Venetian-style windows and corniced pediment. Not quite the renovation project I had dreamed of. 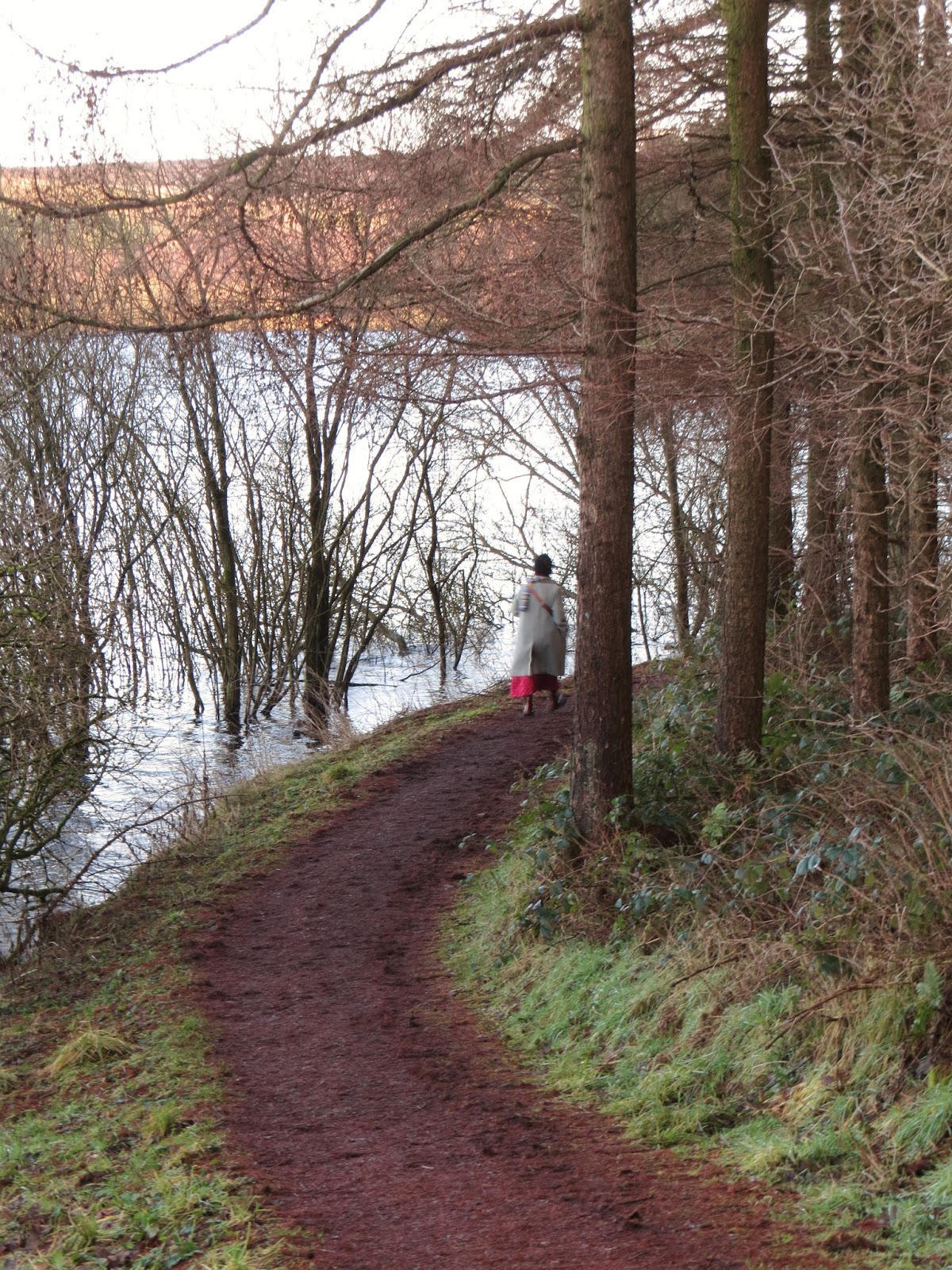 L.P. Hartley's words rang true. "The past is another country; they do things differently there."
***
Posted by nilly at 14:48 18 comments: Links to this post

THESE BOOTS WERE MADE FOR ? 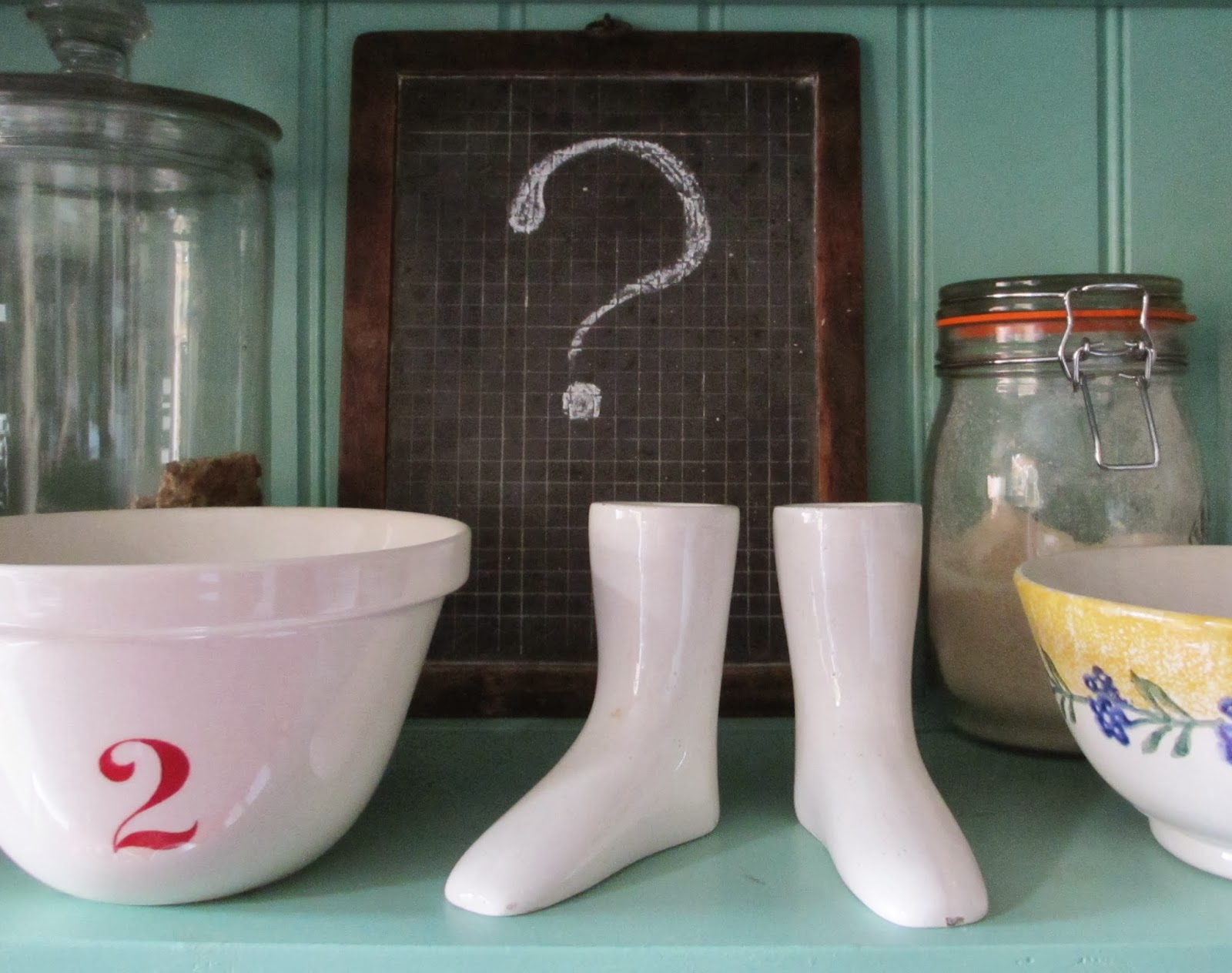 I bought these little antique pottery boots recently. I've had similar pairs before and I love them, the trouble is, I'm not completely certain what they were used for. 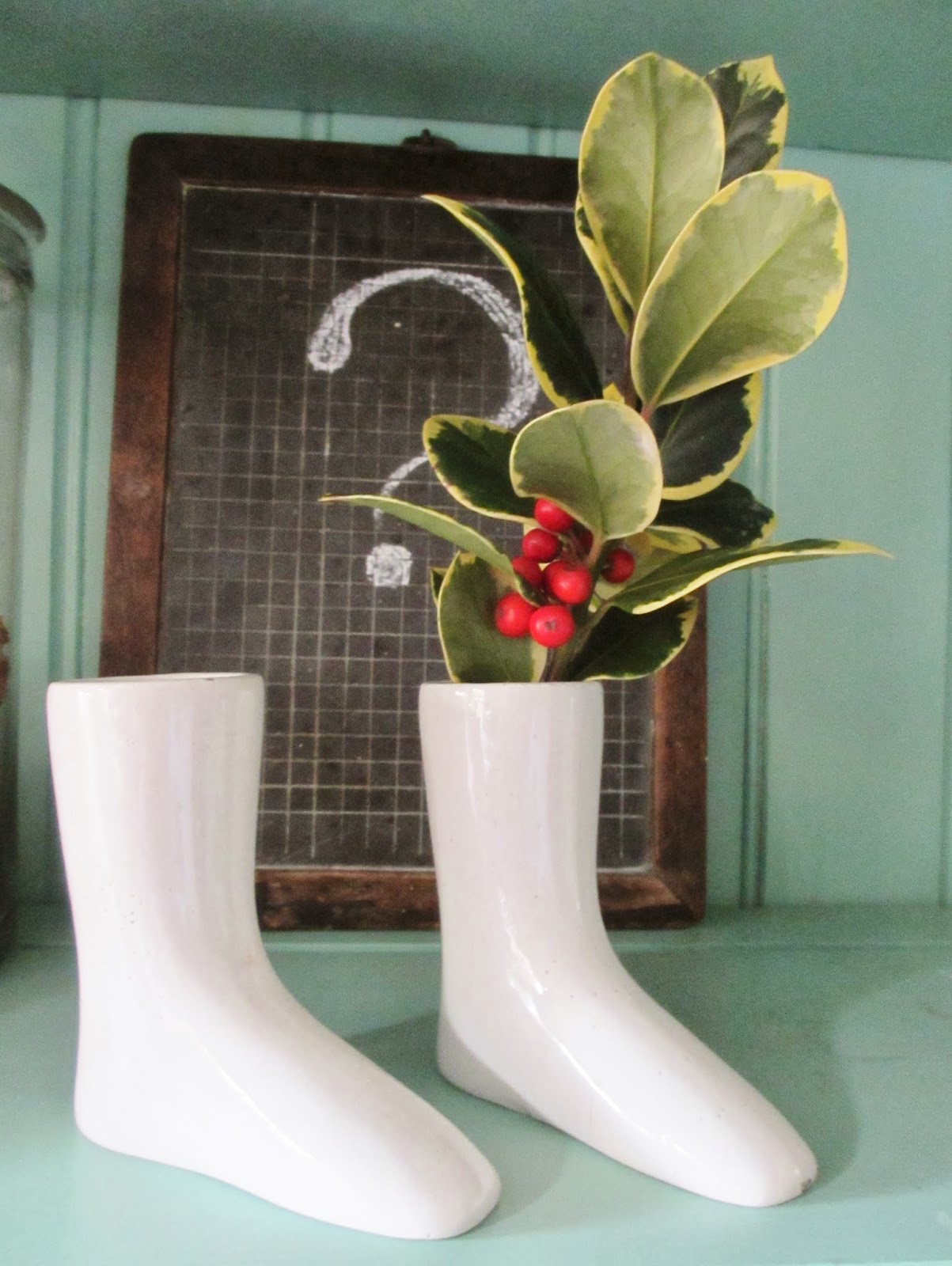 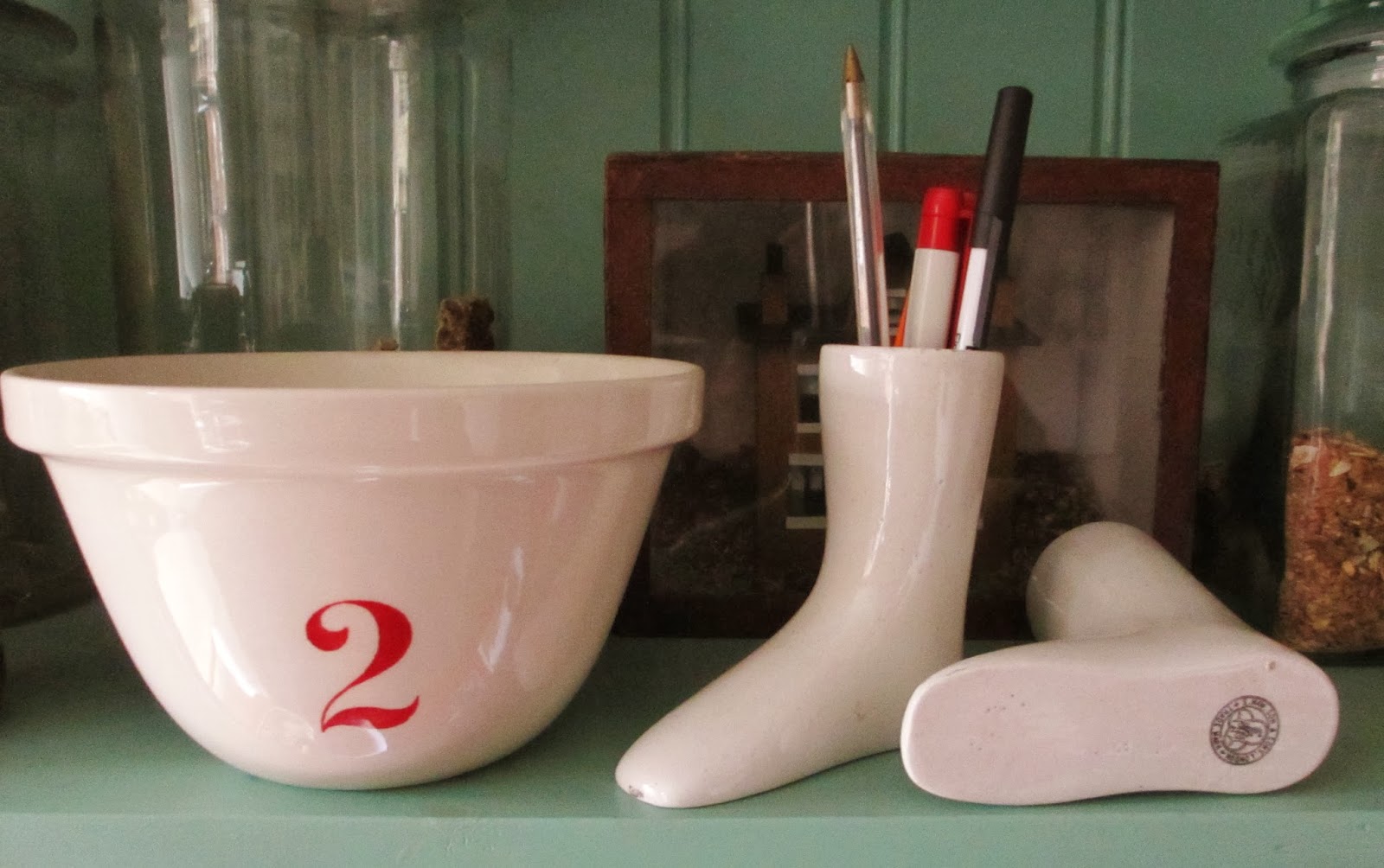 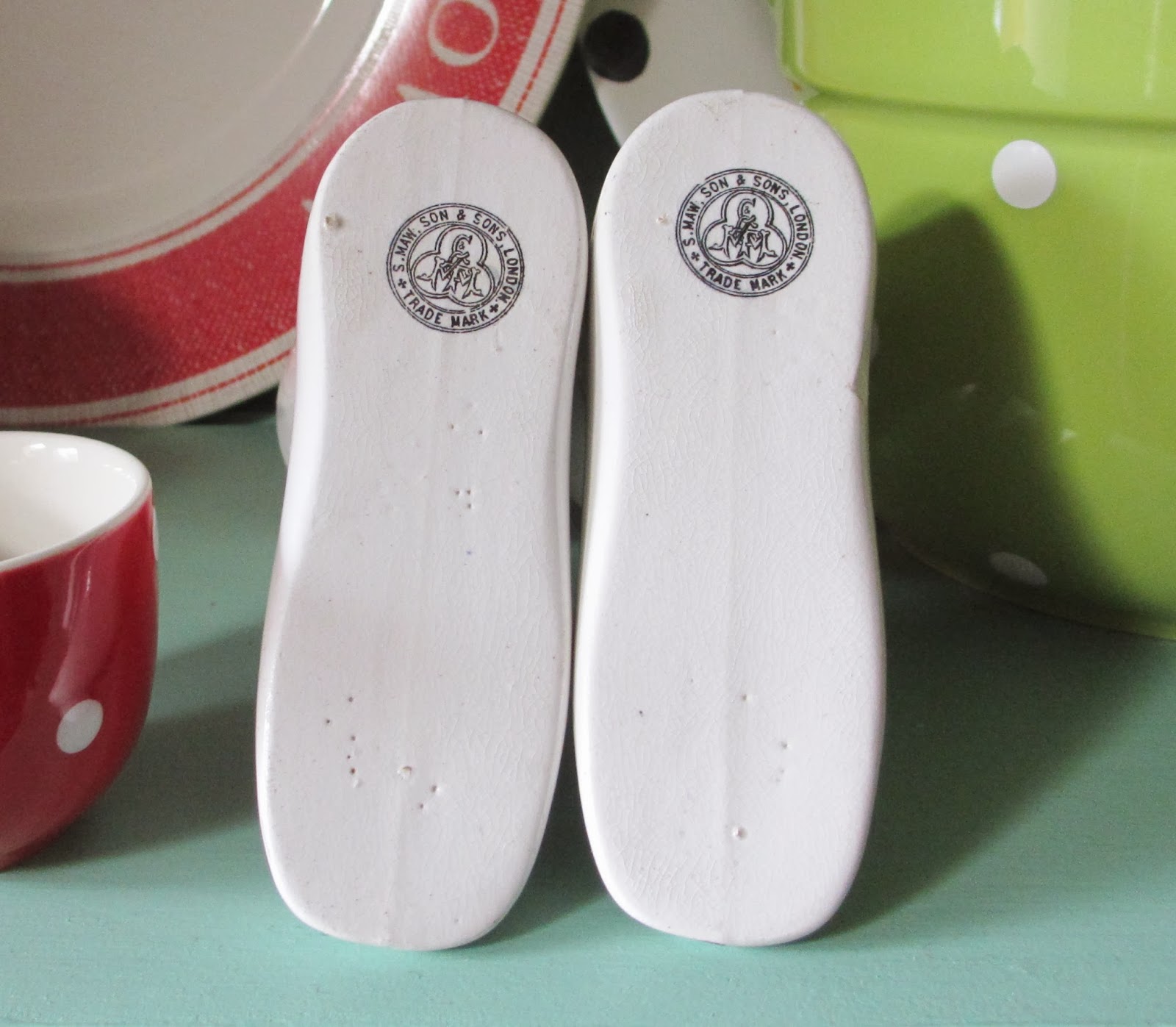 They were made by Maw, Son & Sons, manufacturers of pharmaceutical instruments and useful, everyday china objects for those of a delicate constitution - invalid feeding cups, tooth paste pots, bed pans, inhalers for use with steam to clear the "tubes"... 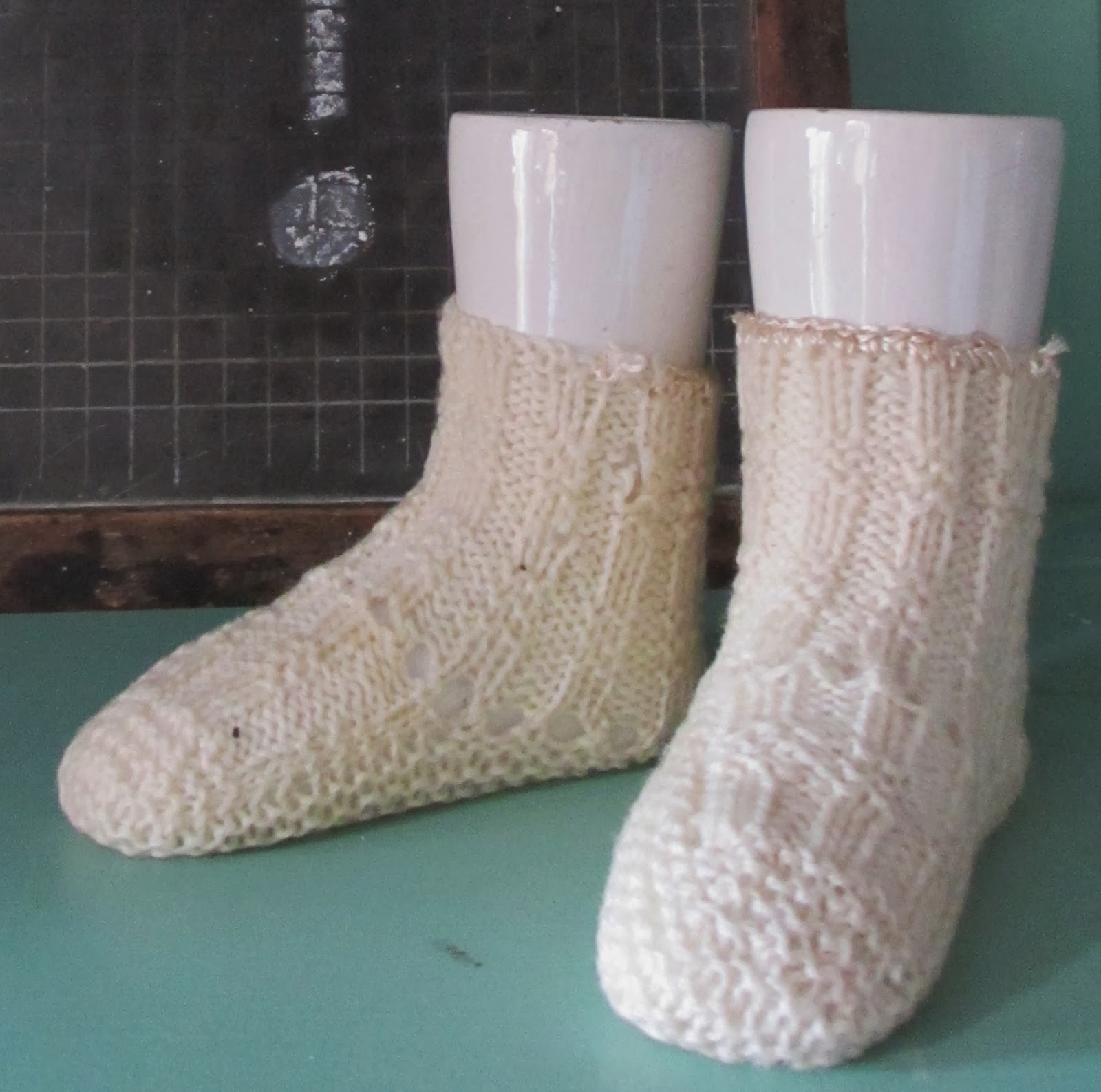 ...so I think they may have been used, filled with hot water, to warm a baby's bootees or shoes before taking the poor mite into the dangerous, winter world outside. What do you think?
***
Posted by nilly at 15:20 15 comments: Links to this post