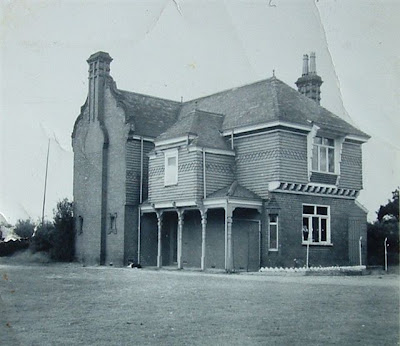 Once upon a time, in 1886 to be precise, Mousehold Heath, a large scrubby heathland in Norwich, was given to the people and a new house was built for the Park Keeper or Ranger. (Those were the days!) It was called Ranger's House and was quite grand. The land was by this time in the charge of the Mousehold Heath Conservators whose job was to maintain and preserve the Heath. The Ranger, who by the early 1900s was my great grandfather Benjamin Burdett, had to be resident within the bounds of the Heath so that he could patrol it and supervise its use, prevent damage and ensure that "the Heath was available for orderly enjoyment by the people of Norwich." 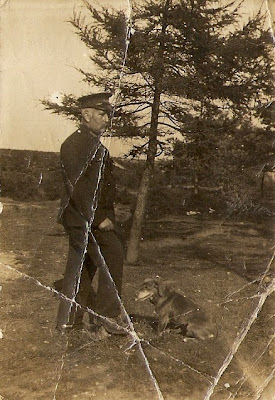 He was a kind-hearted man, a Quaker, and Granny said that during WW1 he turned a blind eye to young soldiers from the nearby barracks playing cards for money in the long grass, though this was illegal at the time. There would be no fun for them soon enough.
He made a garden at the back... 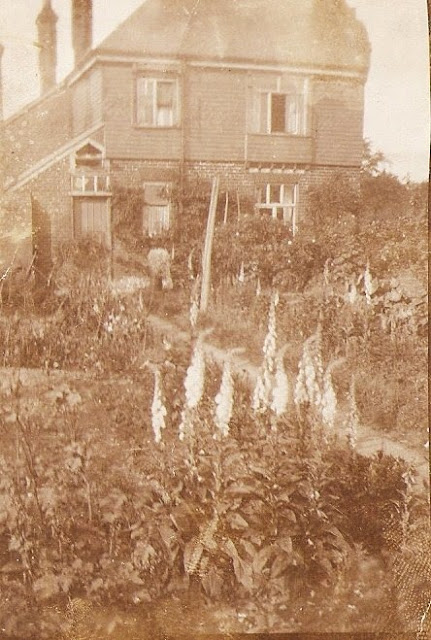 ...and generations of his family were photographed around his happy home. 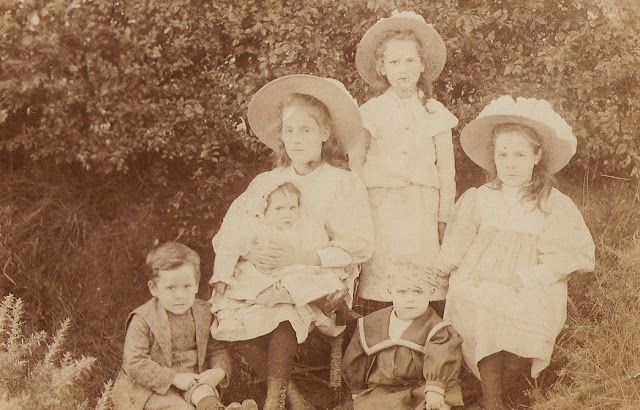 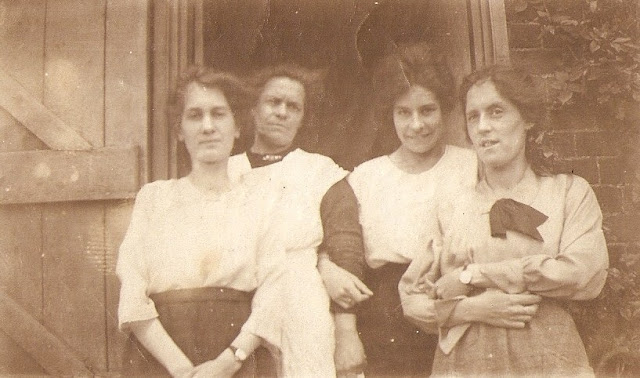 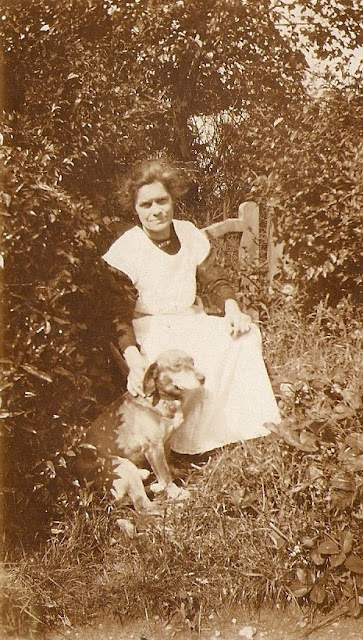 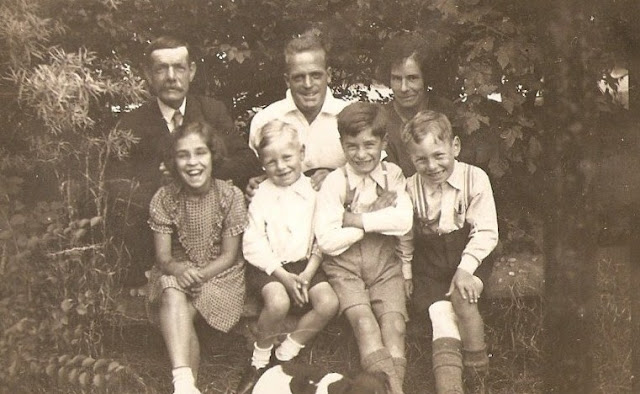 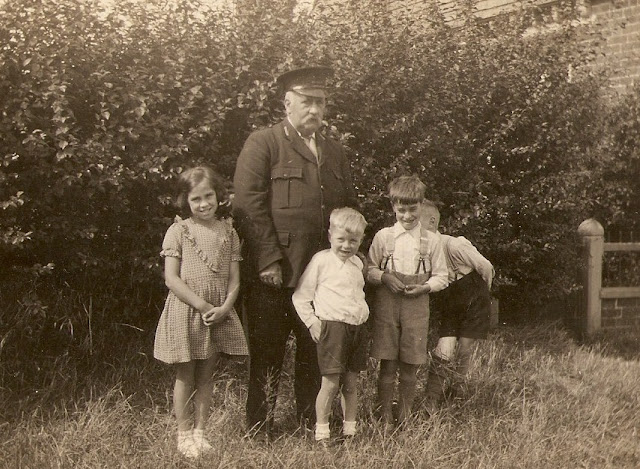 His tenure spanned 30 years and he was the longest serving Ranger. I recently found a reference to him in the memoirs of an old Norwich resident - to her and her childhood friends he was "Mussel Man", "Mousehold Man" in Norfolk dialect. I never met him (he died in 1949) and I didn't visit Ranger's House until 2008 when the house, having been empty and neglected for several years, had been bought by an enthusiastic local man with a view to saving it for the city. He hoped he could raise funds to renovate it and turn it into a local and natural history study centre for Mousehold Heath. A huge task. 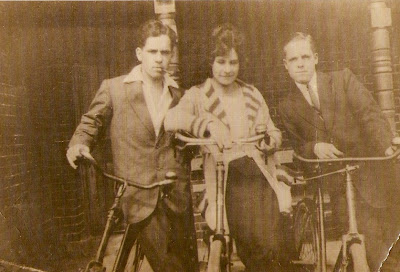 A favourite photograph, above, shows my Granny and her brothers on the front porch with their cycles, in the early 1920s. The view below shows the house with this porch as I first saw it in 2008. 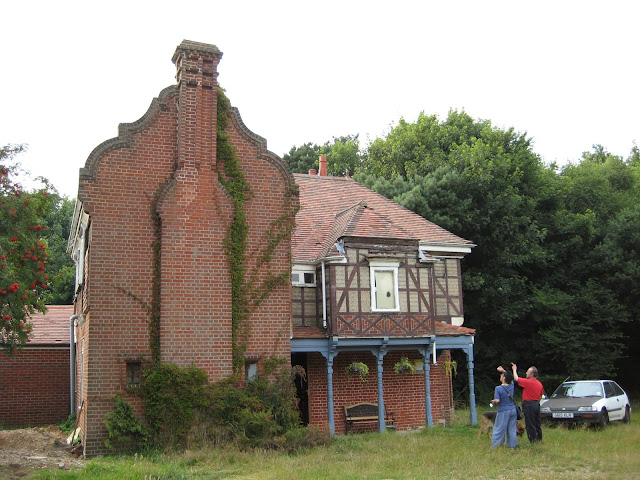 Last week we were in Norwich once more and, sadly, there is no happy ending for the house yet. I found a link which shows the devastation vandals have left inside - here. 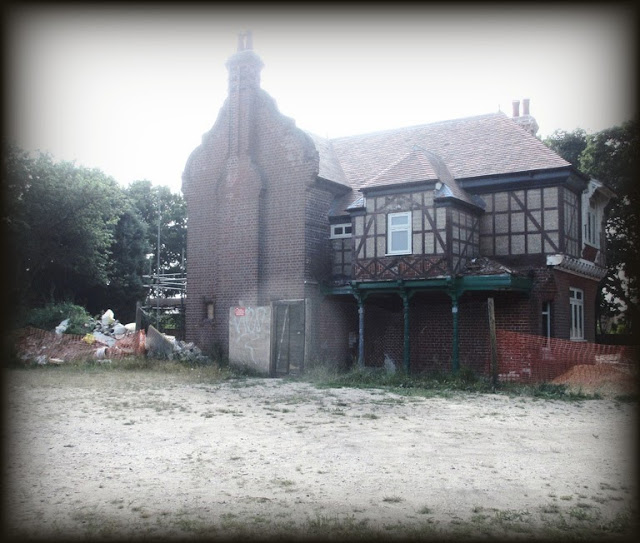 I believe Ranger's House has recently been sold again at auction - as far as I know I'm the only family member left who cares about what happens next.