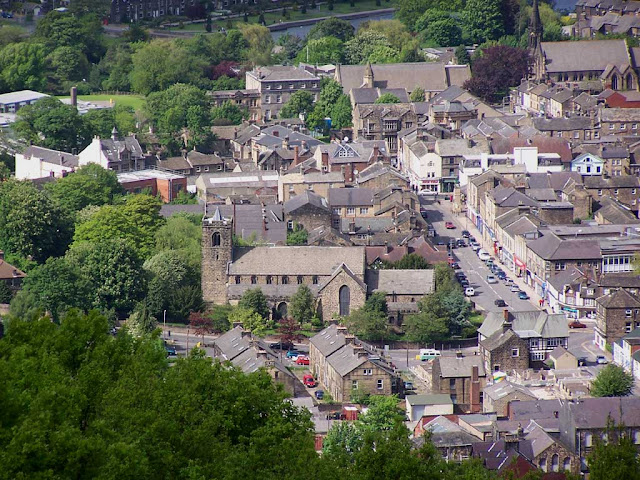 My dear friend J had me worried for weeks. For one thing she had told me she was anxious herself, but she refused to explain what it was all about. "A surprise!" she said. It seemed it had something to do with a court appearance in the small market town of Otley in West Yorkshire. Saturday, May 30th was The Big Day. 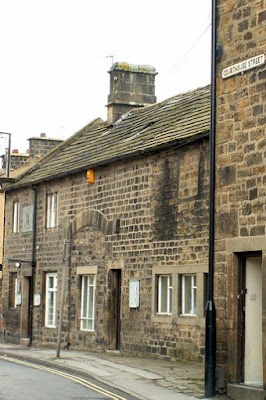 This was reassuring, we were heading for Otley Courthouse, now a thriving arts centre. I'd been here before to the Film Club. As we approached, a vaguely familiar figure strode past me - I mumbled "Hello", anxious not to snub an acquaintance, even if old and half-forgotten. 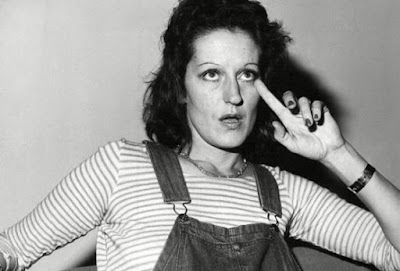 (Dungarees! They're in vogue again - do you recognise her?)


J need not have worried  - this turned out to be a memorable evening! As Germaine Greer appeared on the small stage the applause was thunderous, increasing in strength and accompanied by whoops and cheers (Harrogate this was NOT!) None of us dared to take photographs of our formidable heroine, though I have found one tweet about the event:

Yes, "meandering but never dull" is a good description. Ms Greer's subject was "The Disappearing Woman" - with a short but lively question and answer session to follow. Sometimes she strayed from her main theme and talked about her present obsession, a tree-planting project in Australia. It is, she explained, vital to find something to feel happy, hopeful and positive about. The title of her talk could be taken to refer to one of her main concerns - a worrying imbalance between the birth figures for males and females. In China and India, for example, there appear to be 80 million missing females and large cohorts of surplus males. And figures are rising, the disparity is becoming bigger. 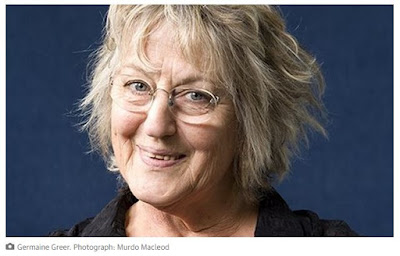 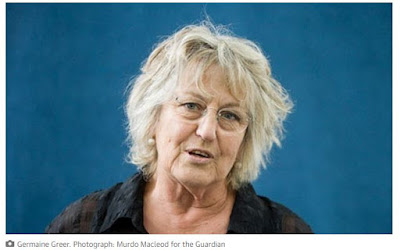 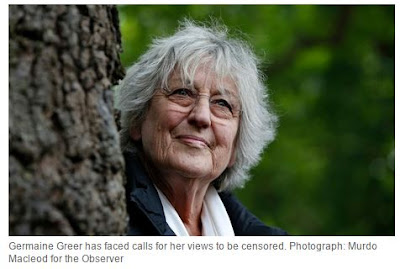 Another digression turned into a bit of a rant against the Guardian newspaper, accusing its journalists of failing to give enough coverage to women's issues or even to have the courtesy to name them. This point seems to be disproved by the photos above from recent editions of that publication and its sister paper, the Observer. Her complaints caused some shrill and understandably nervous questioning from a female Guardianista, with whom, I have to admit, I felt some unfashionable sympathy.
The  evening ended with more applause and the encouragingly mixed audience, young and old and LGBT, wandered into the night with dreamy smiles on their faces, tinged with a little regret that the couple of times she had mentioned gays there was a hint of - what? Disdain? Disapproval? Perhaps it was because even she is an old lady now or perhaps we were mistaken. What the heck - we had met a legend!
***