MR N HAS HIS SAY 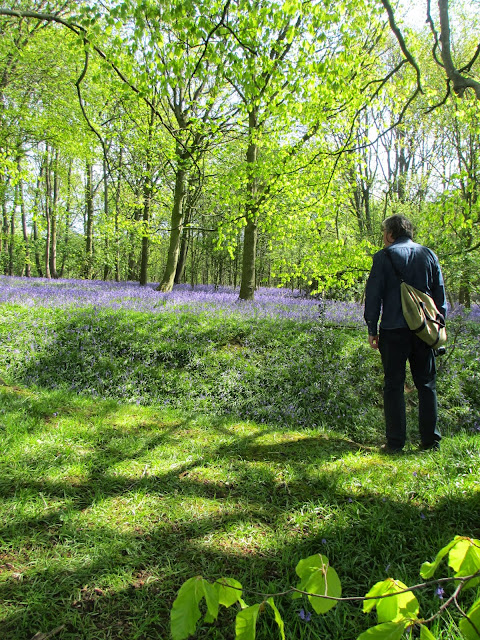 After the dramatic results of the recent General Election, Mr N (who has his own blog, "Arthur's Britain"), could not resist writing his version of the walk through a local bluebell wood that I described in my last post. I am publishing his account today, as a guest post. He has changed a few names (and facts) along the way...
POLLING STATION BLUES - TWO INVESTIGATIVE JOURNALISTS VISIT THE YORKSHIRE VILLAGE OF RUDFARLINGTON ON THE DAY AFTER THE GENERAL ELECTION OF 2015
Following the disaster of yesterday's general election, Consuelo and I decided that we just had to find out if anyone in our Tory-dominated neighbourhood had actually voted for the Labour Party. In order to give ourselves a significant challenge, we chose to play our game of Hunt the Socialist in the quaint little village of Rudfarlington, still owned and dominated by the Inglenooks, an ancient landed family. I said to Consuelo as we parked the car:

"I don't know what we're hoping to find here. I imagine every villager, every farm animal, garden flower and blade of manicured grass in this place is Tory!"

"Lets just go and find out," she said.

In the village square I spotted two actresses from the TV soap Emmerdale enjoying the spring sunshine. So, taking my life in my hands, I popped the question. 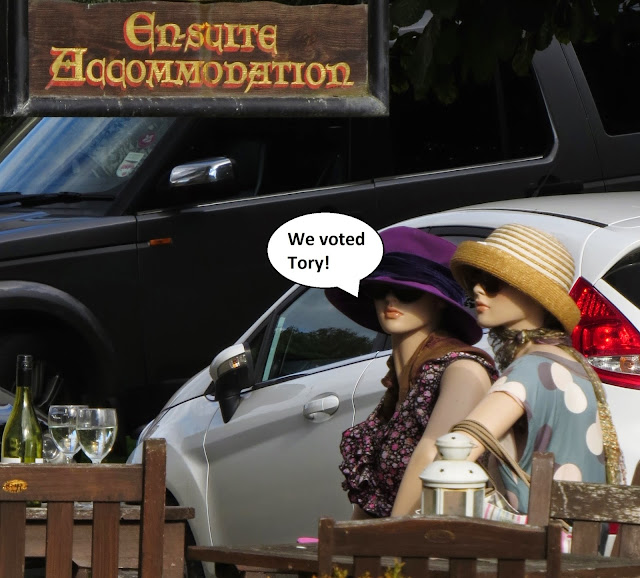 Their relaxed approachability gave me confidence, and soon I found myself accosting and spying on everyone I encountered. 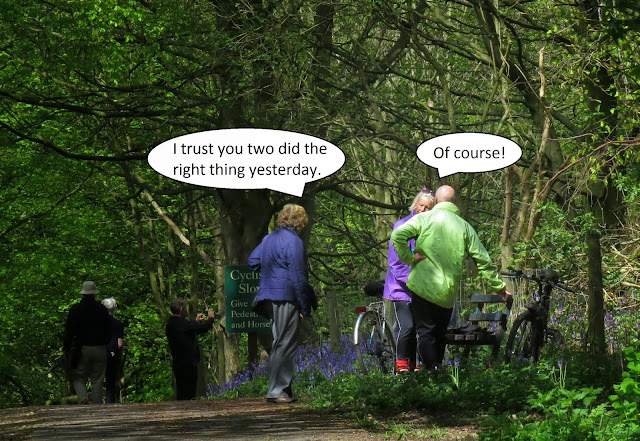 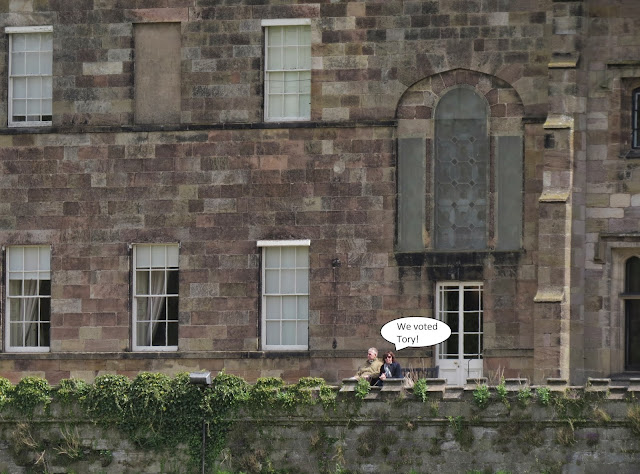 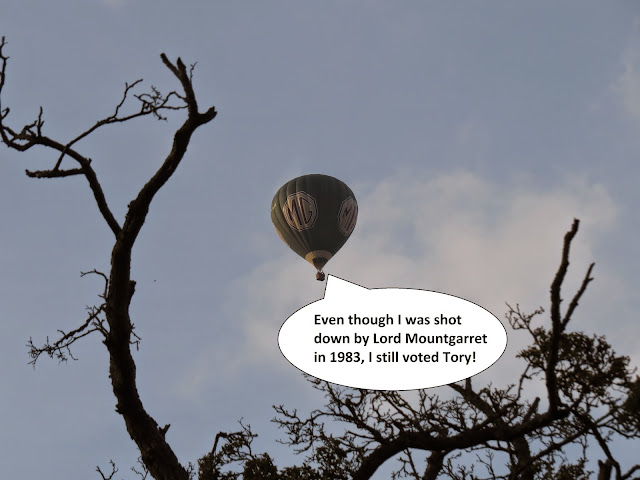 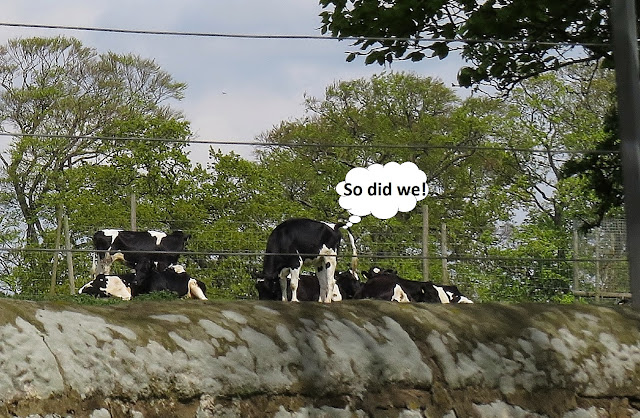 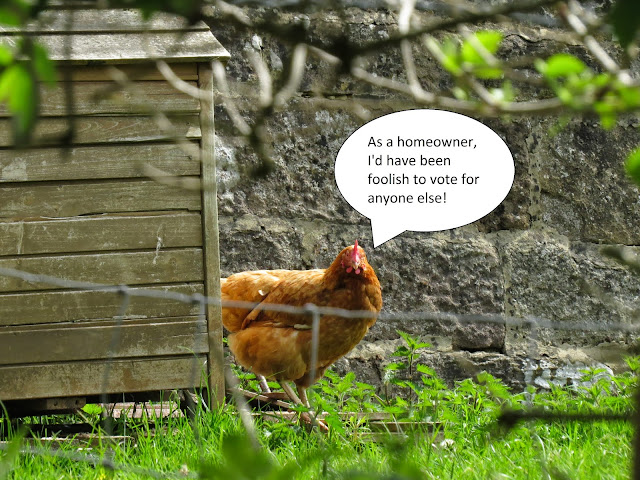 At one point I thought we'd cracked it... 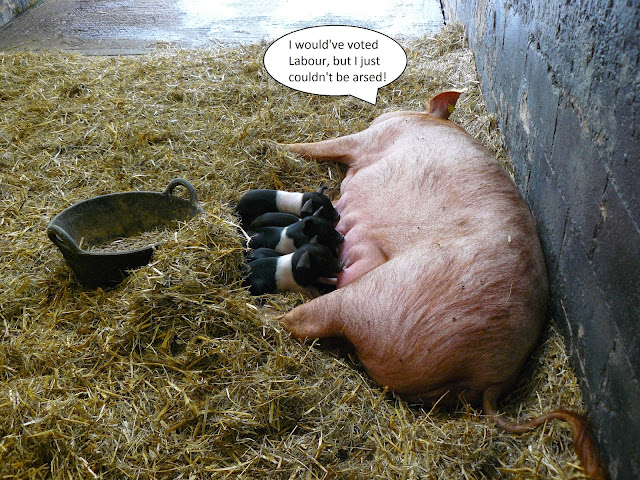 ...but sadly not. Normal service was soon resumed. 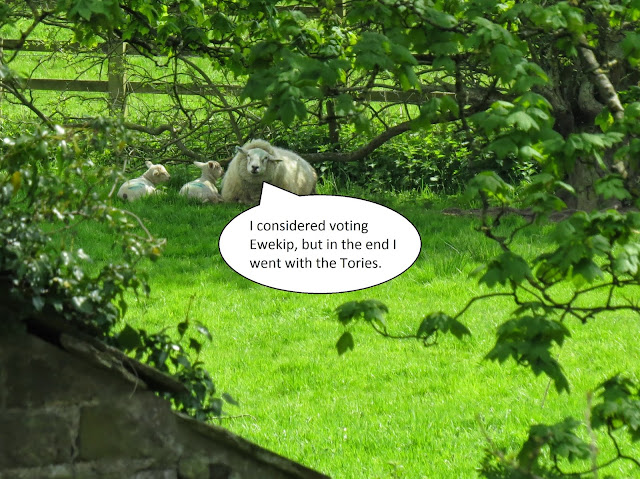 This place was so passionately Tory, you could almost see what people were thinking. 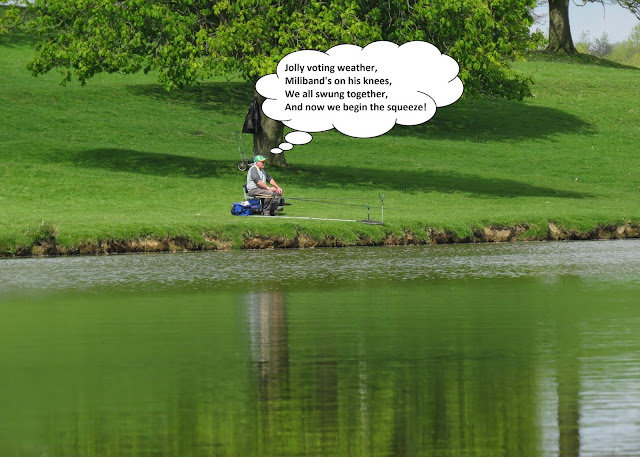 "I suppose the difference between Tory voters and Labour voters," I said, "is that the Conservatives will move heaven and earth to get to the polling station." 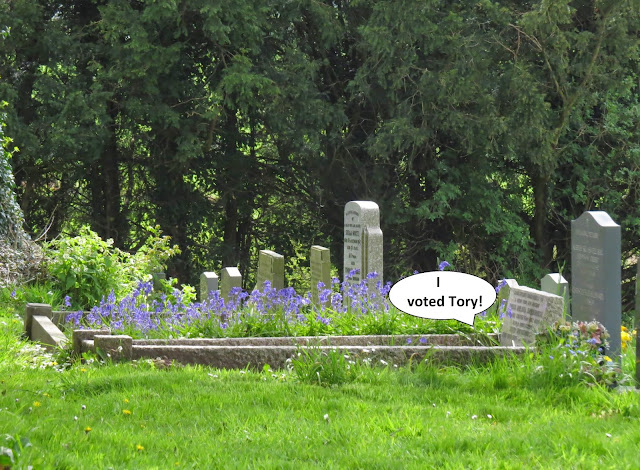 We were having no luck tracking down those elusive Labour voters, so we adjourned for lunch to the local pub, the Pheasant & Mantrap. The weather was fine enough to eat in the garden, where we struck up a conversation with a local shepherd - I say 'local', but he was obviously Scottish.
"Och, aye" he said. "Quite a few people in the village voted Labour."

"Ye'll have a job!" he said. "His lordship's decided to mak an example of 'em."
"What on earth do you mean by that?" said Consuelo.

"If ye gang up Ivybank Lane in aboot an oor from noo, jest beyond the lake, ye'll find oot."

And that was all he would say on the subject, even though we invested significant quantities of Black Sheep ale and artisan shepherd's pie in him. I asked him which way he had voted, and he said this: 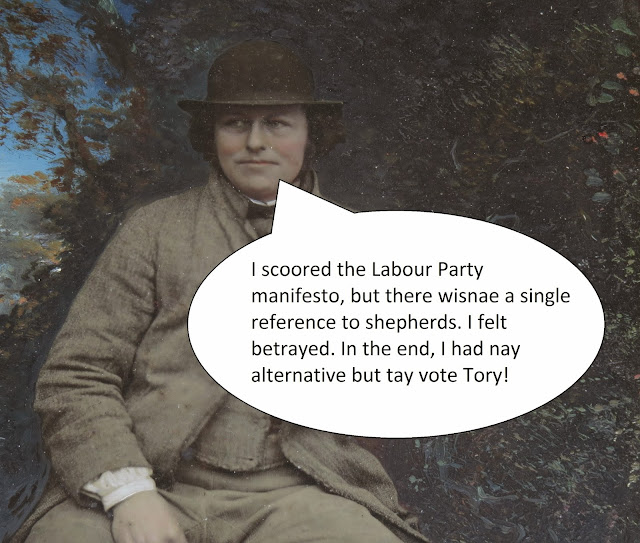 "I can't believe that a working-class Scot like him went with the Conservatives," I said.

"It just goes to show how out-of-touch the post-Blair Labour Party is with its core supporters," said Consuelo.

After we'd finished lunch, we headed for Ivybank Lane and set up our cameras at the place he'd suggested to see if anything would happen. We waited for what seemed like ages, then just as we were about to pack up and go home, something quite dramatic kicked off:


"What was all that shooting?" I said, the hairs still standing up on the back of my neck.

Somehow, I was not convinced.

"Clay-pigeons?" I said, with as much incredulity as I could muster without becoming embarrassing. "I'm not so sure about that! They sounded more like rifles than shotguns."

"So what do you think was going on?"

"What did he say, exactly? I couldn't understand a word!"

"I know it's a bit far-fetched, but is it possible that Rudfarlington has just been cleansed of all its socialists?"

"You'll be telling me next that the helicopter we heard was attacking them with chemical weapons and barrel bombs."

"I wouldn't put it past the Tories!" I said. "I have a theory that the landed aristocracy, which has been in political decline for well over a hundred years, has seen the chance to regain its power and position now that the Conservative party is dominated by upper-class Etonians. I mean, that shepherd seemed genuine enough. He wouldn't have said those things if they weren't true."

"It was a wind-up, you idiot! It's a well-known trick: the country bumpkin outsmarts the sophisticated townie and gets loads of free beer and pies. Remember those films: The Maggie, Whisky Galore, Local Hero?"

I thought about it for a few moments, then I said:

"And all of them set in Scotland... You don't think the SNP are somehow involved in all this, do you?"

"I wouldn't be surprised," said Consuelo. "Before the election, Nicola Sturgeon was alleged to have said that a Tory victory would be better for the SNP's cause - and she is a very determined and ruthless politician."

"So if England was ethically cleansed of Labour supporters, it could help the SNP to achieve its aim of independence," I said. "It certainly makes you think."

"But if there's the slightest truth in it, the story's bound to come out," said Consuelo. "After all, we live in a liberal democracy protected by a free press."

"I have just two words to say to that!"

"And those two words are?"

"Okay, you've made your point."

"Where was your beloved free press when he, and numerous others, were committing their crimes? The investigative journalists must all have known what was going on, but they chose to remain silent until the Establishment criminals escaped into senility or death."

"I suppose you're going to blame Rupert Murdoch again."

"The idea of him as a guardian of free speech and democracy is laughable! - I mean, what would be the point of us contacting News International with this incredible story? There'd just be another Establishment cover-up!"

"Nothing silly, I hope."

"I'll blow this whole thing wide open on my blog!"

"Nobody ever reads your blog. You recently set a new world record for the lowest number of hits ever achieved by anything that's ever been put on the internet...but unfortunately no-one noticed - not even those weirdos at the Guinness Book of Records."

"But this story is far too big to be ignored. It has such a profound gravity - such critical mass - that's it's bound to go viral. This is the most sensational scoop since the Watergate scandal. It will be known the world over as 'Rudfarlingtongate'."

"How delightfully the name trips off the tongue..."

"But one thing I did find quite curious," said Consuelo, "was the way everything went eerily quiet as soon as the shooting stopped?"

"I noticed that as well," I said. "The birds stopped singing, and it got noticeably darker, even though there wasn't a cloud in the sky."

"Anyway," said Consuelo, "let's not end with a negative vibe. I think we should go for a walk in Rudfarlington's renowned bluebell wood."

And I was glad we did, for there is nothing more beautiful in all of England than a bluebell wood in the month of May, despite the unfortunate political connotations of the colour. And here, to prove just how beautiful it was, I present a very short video:

"You don't always get a clean kill with a firing squad," I said. "But hey, if the British people want to be governed by the Conservatives, then so be it. That's what democracy is all about."
I took a few more photos as Consuelo drifted deeper into the wood. After a while I lost sight of her; but then I heard her voice carried on the warm spring breeze:
"Come over here, Arthur," she said, "I think I've found what we're looking for."

I joined her a couple of dozen yards away in a sunlit glade. She was pointing at the ground.

Down at our feet, hidden in the grass, was a tiny, very delicate and vulnerable wildflower.

"I must get a photo of this!" I said, my spirits lifting for the first time since the election. 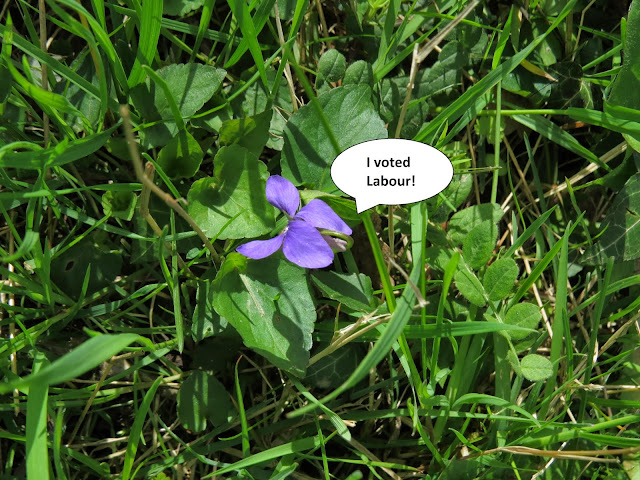 Then we spotted another one: 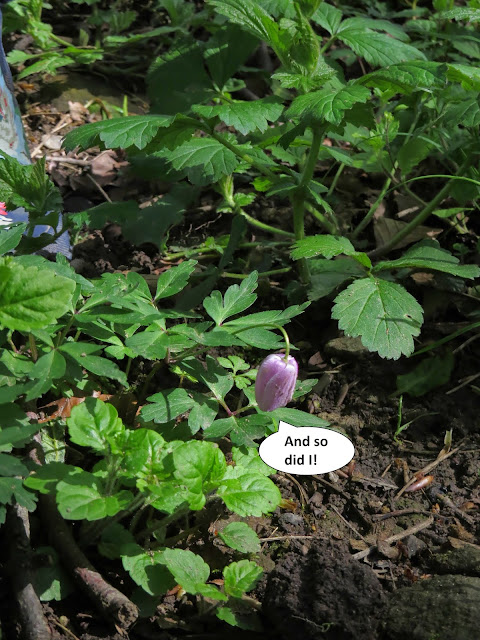 "Perhaps there is hope after all," I said.

Consuelo pondered my statement for a few moments; then she said:

"Yeah, no, you're right," I said. "The country's going to be trashed, and this time the Bullingdon Club won't be picking up the tab."


"Don't be too despondent, Arthur. Try to remain positive."

"Yes, let's go home and have a nice cup of tea...and there's still some Eton mess in the fridge."

"Not as much as there will be in this country after Cameron and his mates have finished with it!" I said. 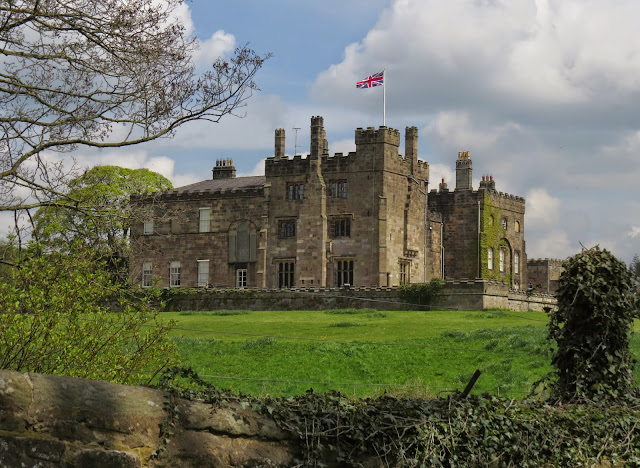 The Union Flag flew proudly over the crenelations of Rudfarlington Castle as we made our melancholy way back to the car park.

"The natural order has been restored," I said, with undisguised bitterness and irony. "The rich man in his castle; the poor man at his gate, as the song says. Feudalism is alive and well in twenty-first-century Britain."

"Maybe David Cameron will be as good as his word and deliver one-nation Conservatism."

"In your dreams!" I said. "Enoch Powell was right when he said that the Tiber would flow with much blood. But it won't be the blood of racial conflict - it will flow as a consequence of brutal and merciless cuts to welfare and the NHS."

"There's only one thing for it," I said. "We'll have to move to Scotland, the last bastion of socialism in these benighted islands."

"No chance!" said Consuelo. "I don't find the SNP any more appealing than the Tories. And how can you trust a party whose leaders are all named after fish?"

"That doesn't really make a lot of sense," I said. "It's the sort of thing people say to rationalise the fact that they've just voted Conservative... And please tell me you didn't. I couldn't bear it if I was the only socialist in the village."

In silence we retraced our steps along Ivybank Lane. Then, as the car park came into view I said:

"Nicola Sturgeon has such an iconic and individual look, don't you think?"

"She's quite attractive, in a Scottish sort of way. I wonder who her fashion consultant is..."

"Someone she headhunted from the Crankies, by the look of it."

"Well, you've just blown it as far as moving to Scotland is concerned."

"So it looks as if we're stuck with the Tories, then," I said.

"In perpetuity, I suspect," said Consuelo. "Especially once they've implemented all those constituency boundary changes they're planning." 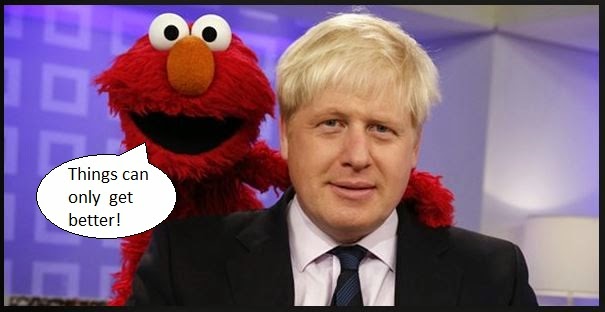